I spent my weekend removing moldy caulk from my shower and recaulking, and replacing the ripped screen in our porch door, but you don’t want to see any of that, now do you?  I know–boring!  So, instead, I’m going to show you what I did on Friday to display some of my daughter’s artwork.  The disclaimer is that I did not come up with this idea on my own; I’ve seen it all over Pinterest and the internet.  However, after looking at five or six web sites, I can’t seem to figure out who really came up with the idea.  So, forgive me for not crediting anyone specifically for thinking this up!  Also, Amy did something pretty similar HERE (I get all of my best ideas from her!).  As is true with most of my “tutorials,” it’s really too simple to be called a tutorial!  Here’s what I did: 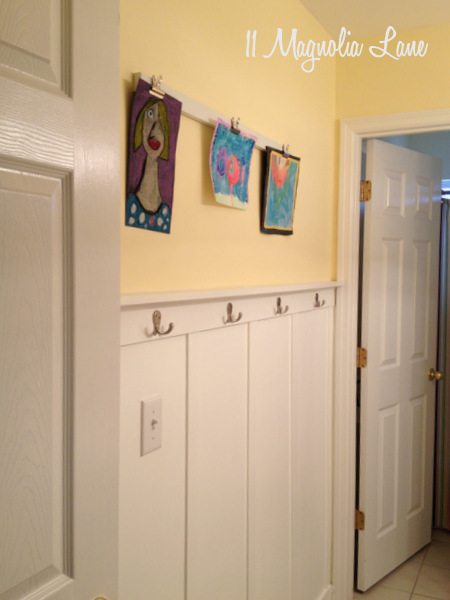 I started with 1″ x 8″ fingerjoint board, that I had left over from building my PANTRY shelves.  Because I had two pieces that were about 34″ long, that’s what I used.  I cut them to make sure they were the exact same length, sanded the edges lightly, and primed and painted them.  Here’s the paint and primer I almost always use (it’s available at Home Depot): 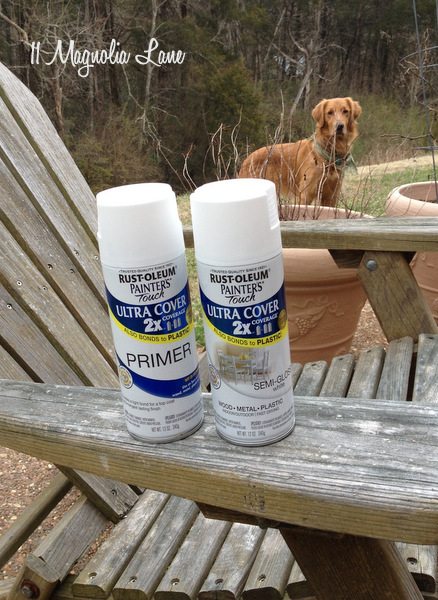 Harley is safely in the background.  He likes to join me out back when I’m spray painting, but he does NOT like the hissing sound the paint makes.  Maybe it reminds him of an annoyed cat?!

This is my high-tech spray painting station.  Jealous? 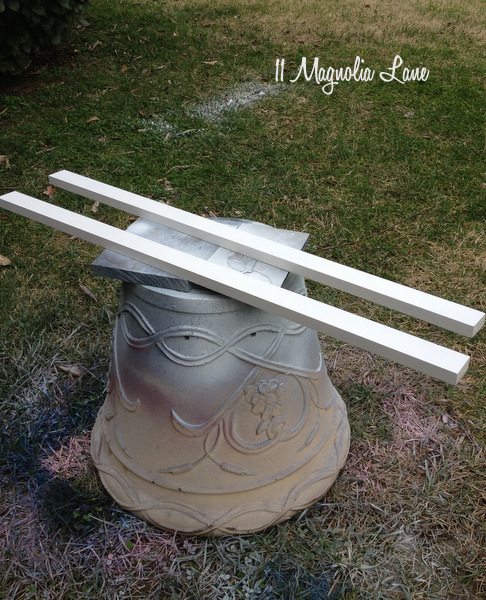 When the two boards were dry, I simply glue-gunned bulldog clips onto them.  I spaced my bulldog clips about 16″ apart, and I used three per piece of wood.  Obviously you could use a different number of clips based on the length of your board.  I’m telling you that they’re bulldog clips so you don’t have to look like an idiot at Hobby Lobby or an office supply store (like I did), asking for “those clipboard clip thingies without the clipboard.”  I got my bulldog clips at Hobby Lobby; they looked like this: 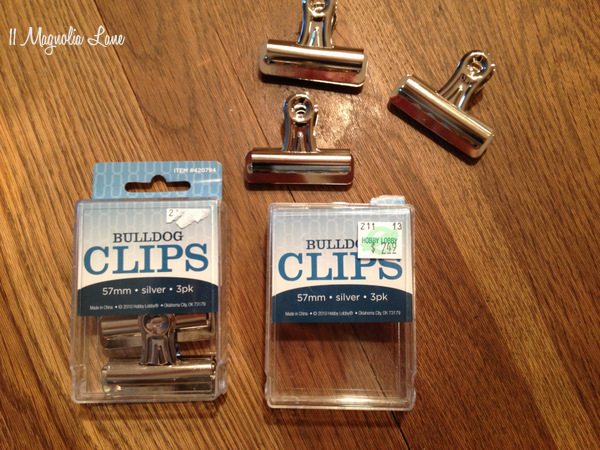 If you can’t find them, or want to order online, then you can buy them at Amazon {here}

(affiliate link).
I then took my smallest drill bit (7/64″) and drilled a hole at each end of the board.  Then, using 2″ wire brad nails and a level, I hung the board on the wall.  The reason I chose this method to hang it was that I wanted to do minimal damage to the wall.  Two small nail holes will be easily patched and painted when we remove the display.  Here’s a close-up: 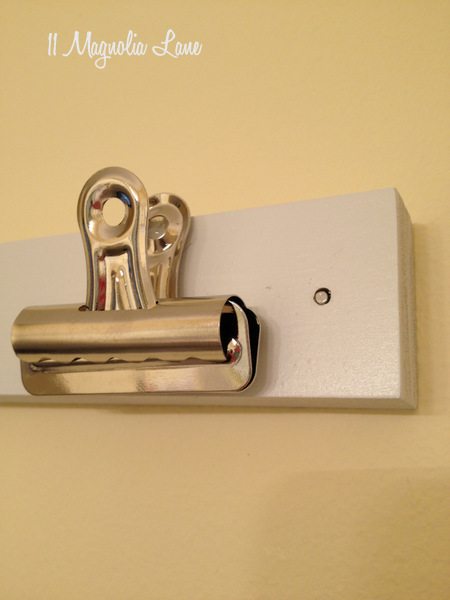 I later took a white paint pen and dotted paint on the nail head to make it less obvious.  Also, when there’s artwork hanging on the end clips, it covers the nail as well.

I wound up hanging one board in the kids’ bathroom, and one on the half wall just outside of their bathroom, right at the top of our stairs.  I considered putting them both in the bathroom, one on top of the other, and would have done that except that since we have board and batten in the bathroom (read about that HERE), I think the display boards would have been too high.  Here are some “after” shots: 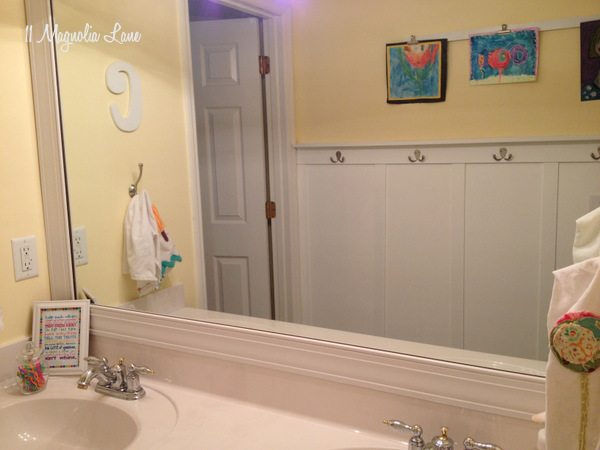 Did I ever show you the mirror after I framed it out?  See above, if not.  I think it’s a great way to dress up a contractor-grade “wall of mirrors.” 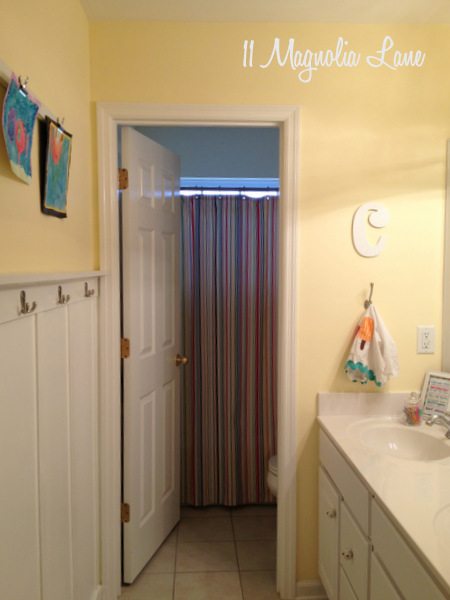 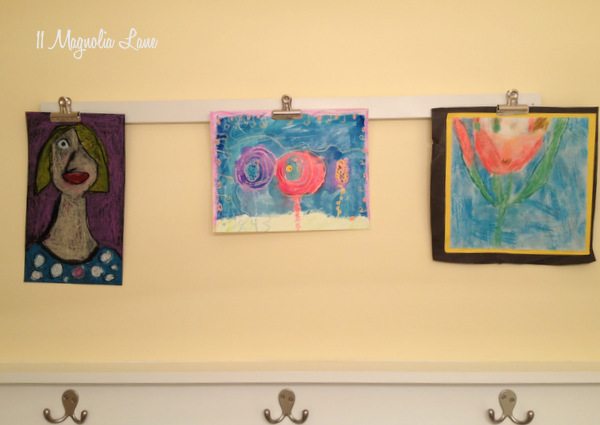 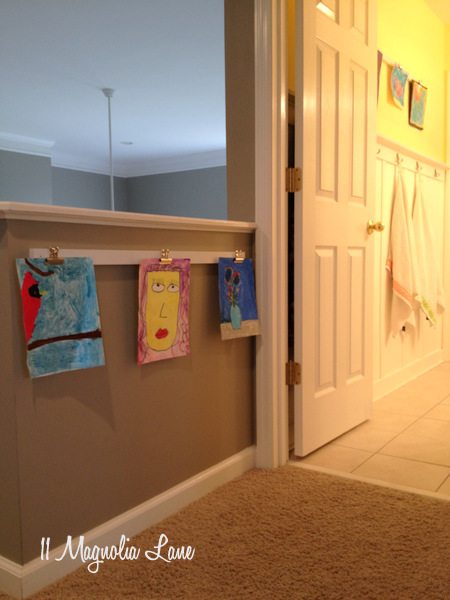 My daughter is the only one who brings me artwork anymore; my son is 12 and just not that into art anymore. 🙁  Wouldn’t it be a good idea to have one board for each kid, though?  You could swap their art out seasonally.  Stick them in the hall, the bathroom, the kitchen, even their bedroom.

We’ve discussed “paper management” before, but do you have any great ideas for containing the paper trail that comes with having children?  Let us know! 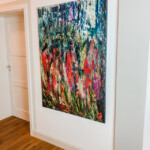 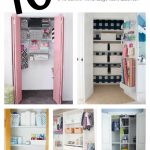 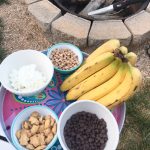 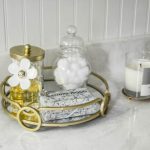 The Powder Room at the MCC House