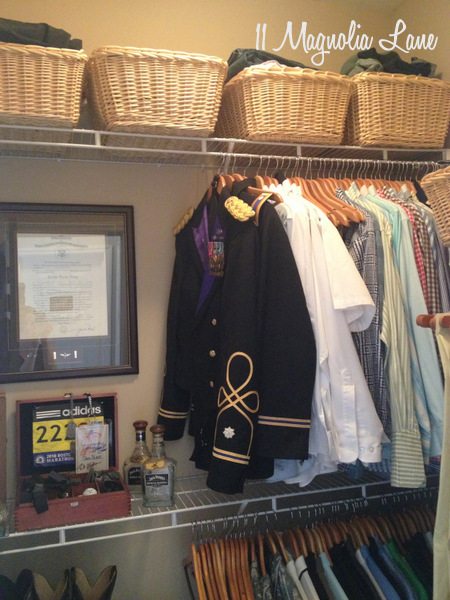 A few months ago, when we put the house on the market, I embarked on a weekend mission to tidy every. single. closet in the house.  I had already done mine, well before the move, in pink with a cute chandelier {read about that HERE}, but everyone else’s needed help, too. 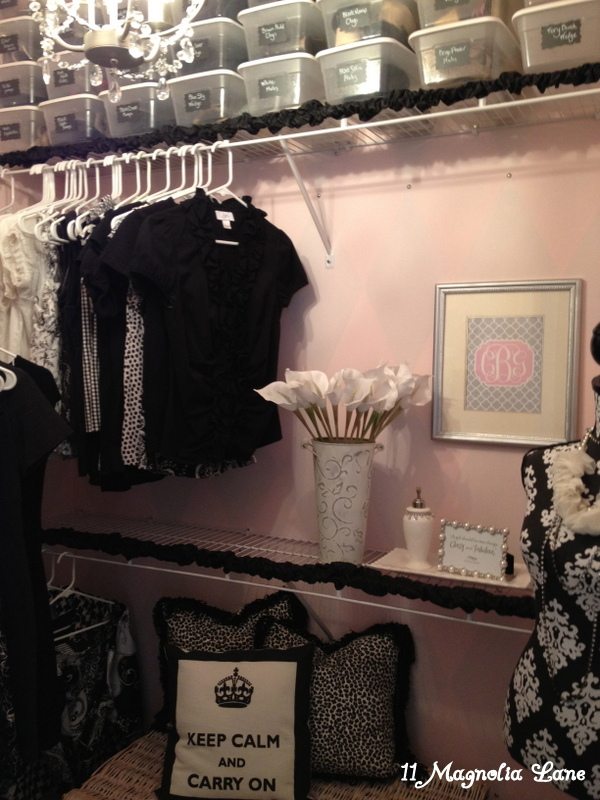 My husband and I have his and hers walk in closets in our master bedroom, which is a first for us.  We’ve been blessed to have walk in closets in the past, but we’ve always had to share one.  The two closet doors face each other and I used the Kvill frame from Ikea on each door to label them “Hers” and “His.” 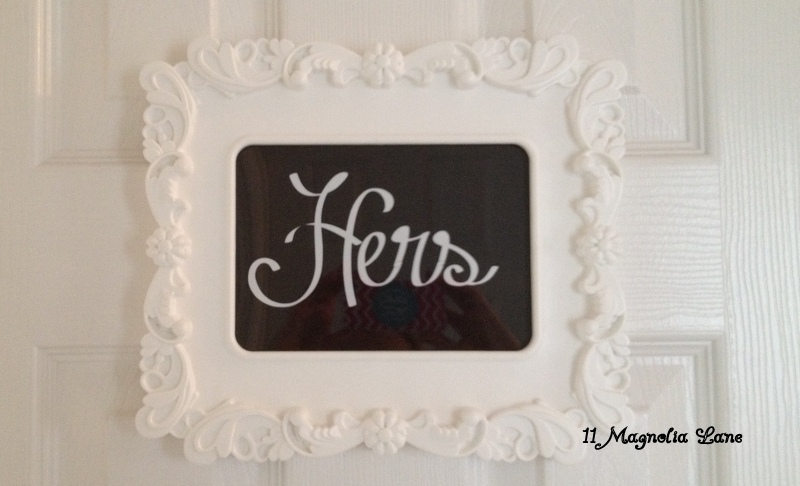 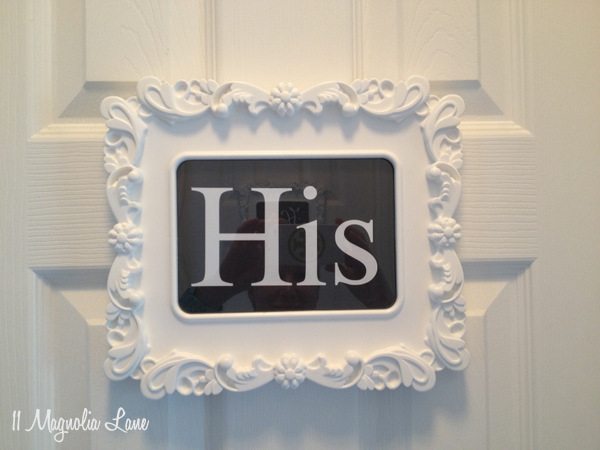 My husband’s closet was already a tan color…if we weren’t moving, I probably would have done a brown 9″ vertical stripe in there, but it just seemed more important to get things tidy and organized.  I picked a weekend while he was away for work, although I promise I didn’t give anything away without his approval–he had a stack to go through when he got home!

One of the best ways to make clothes look organized in a closet is to use one kind of hanger.  I bought several big boxes of wood hangers and hung everything up, organized by color and season because that’s the way I roll.  I have the slimline velvet hangers in my closet, but the hubs likes wood ones, so that’s what I used.

Would you believe the wicker baskets on the top shelf were originally on my kids’ changing table?  We have about twelve of them because I ordered extra–they’ve organized lots of closets over the years!

I decorated the wall that holds his pants with a metal golf sign that was just collecting dust in the attic…he is QUITE the golfer! 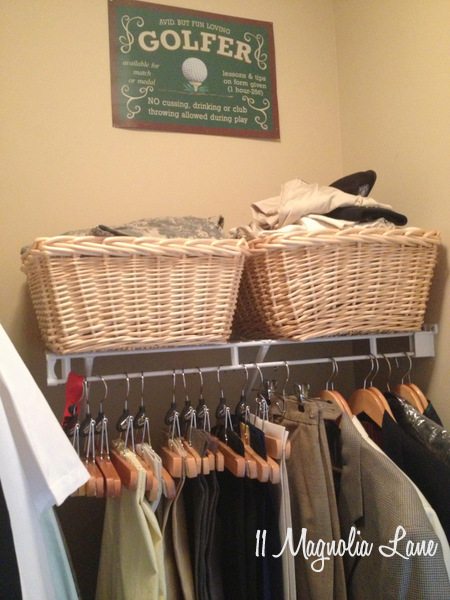 I tried to use all wooden hangers for his slacks, but it looks like a metal one has crept back in.

I had enough room left over after organizing and re-hanging his clothes to put a shoe organizer on the floor, with our laundry basket in front of it.  Mens’ shoes take up so much space, so it saves room to use a vertical organizer rather than to line them up on the floor. 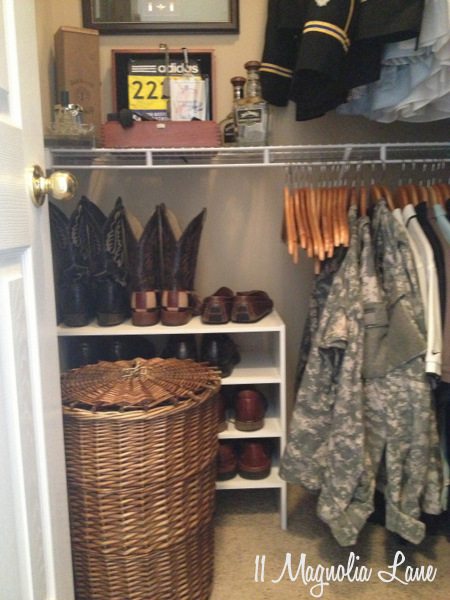 I also had enough space to create an area for his valet box–it’s full of watches, cuff links, bow ties, suspenders, and hundred of tiny little Army uniform thingies.  I try not to get involved in all that!  The empty bourbon bottles are from a couple of single barrel batches that his unit has ordered over the years.  He might uncork them and sniff when he needs strength–who knows? 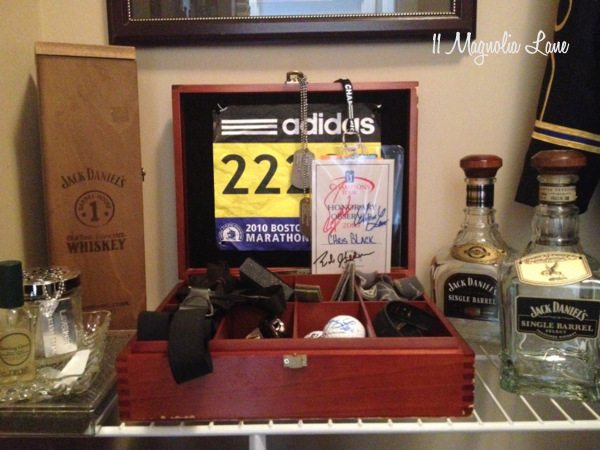 I also hung a few things in here that weren’t being used in his office or elsewhere in the house, to make it feel more like a library than a closet.  His commissioning certificate is over the valet box: 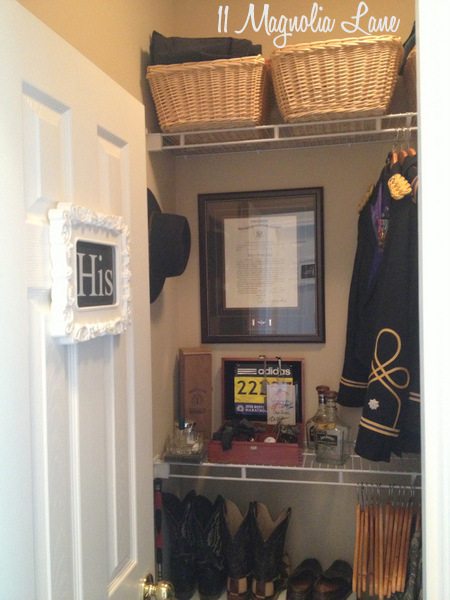 And his master’s degree is on the wall where I hung his Australian hat and his tie rack.  Lest you think I’m dissing his accomplishment, I’ll have you know that mine is covered with spider webs in the attic! 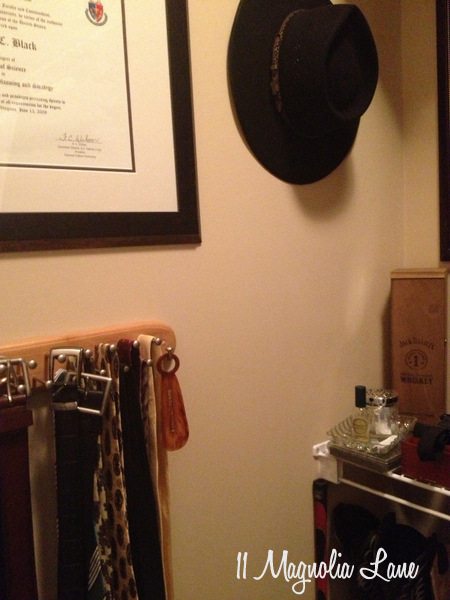 The back of the door is an underutilized area in a closet, so I put some hooks on his: 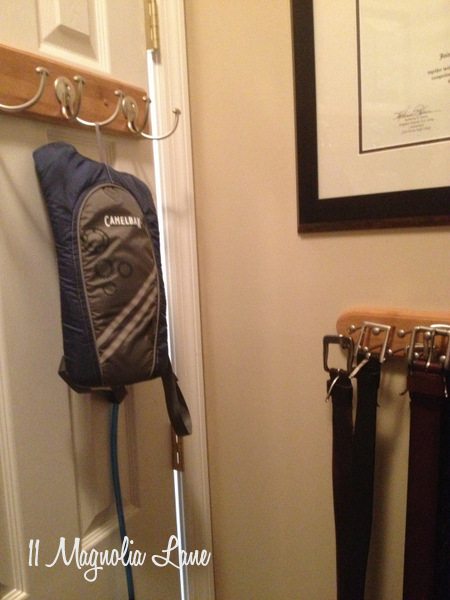 And that’s it!  It only took about a half day, but it made a big difference in how functional his closet was for him.  I wish I’d done it sooner–all those Army uniforms take up a bunch of space, and organization is key to getting everything to fit.

Thanks for stopping by (and thanks, honey, for letting me show your closet to the world!). 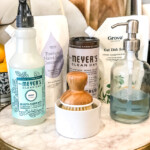 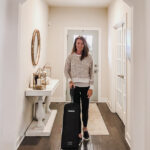 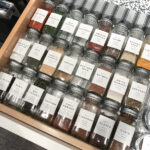 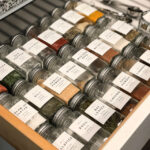