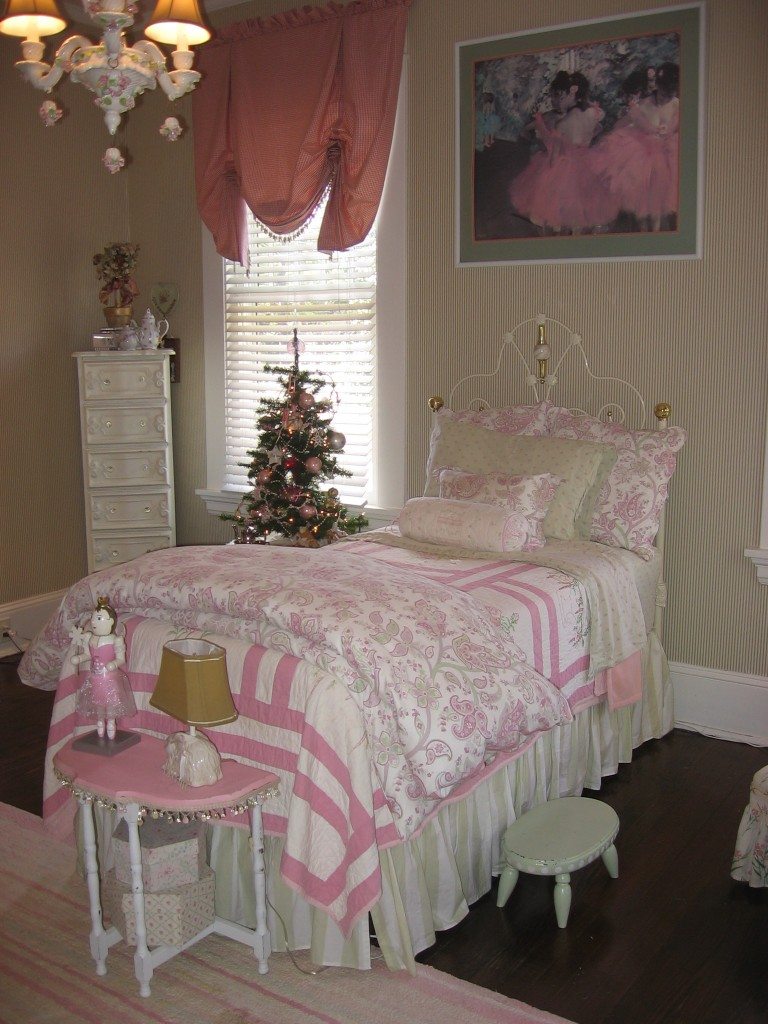 Probably the saddest thing about this photo medley is that it might be the last one done in shades of pink and green, as my daughter tells me that next year she wants her room done in robin’s egg blue and green with ELEPHANTS on the walls.  OK…no problem, honey!  Actually, I’m not sure how I’m going to include the elephants without it looking tacky, so I’m hoping she’ll just forget about those.  No need to remind me that I’m stifling her creativity by saying that!  Her room is pretty much entirely pink, green, and white, so it will be a challenge to shift gears with the color palette.  But, since I really do love to decorate, I will arm myself with a can of spray paint and create a more grown-up retreat for my seven-going-on-seventeen-year-old! 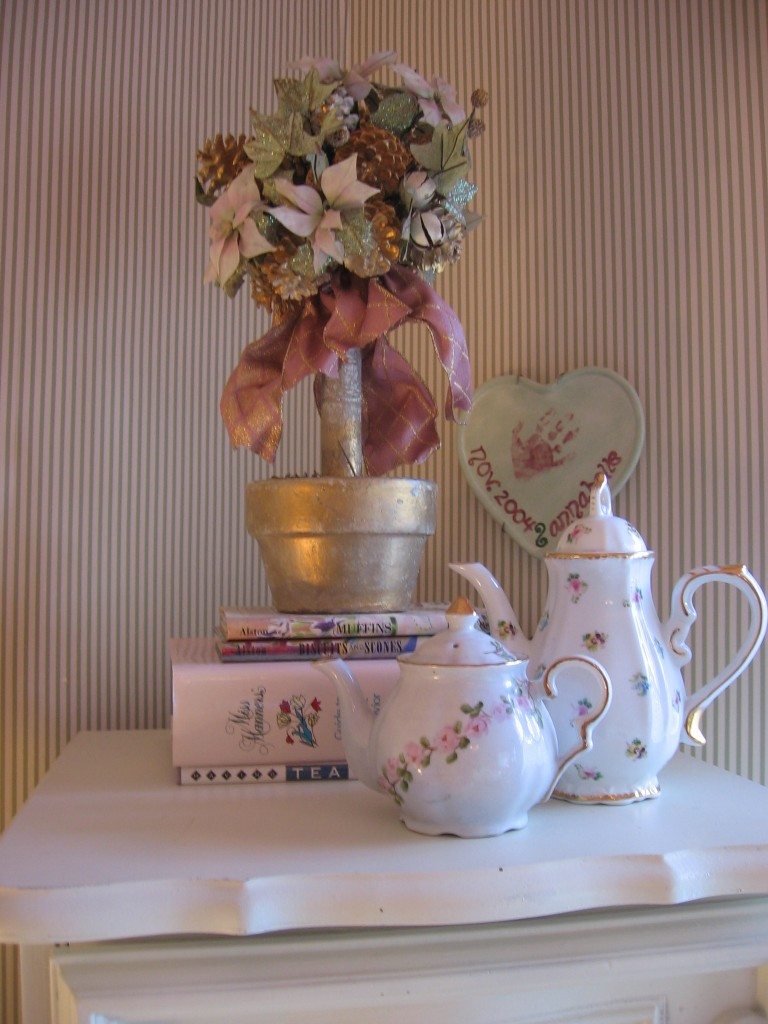 So, all of that is a little background on why I really savored the Christmas decorating this year and decided to take pictures.  I know that everyone’s taste is different—consider me and Annabelle to be absolute proof of that statement—but I thought it might give some of you inspiration as you decorate for the holiday.

I seem to have a bit of a “tea theme” going on in Annabelle’s room, hence the two teapots and the tea-related books stacked under the topiary.  I know you probably can’t see that the books are titled Muffins, Scones, and Tea for Two, but that’s because my camera is pretty old and has been dropped on its head a few too many times.  As a side note, I asked Santa for a nice one this Christmas, but I’m not really sure that I’ve been good enough to get it!

Back to the teapots…the larger one is from a dear friend who gave it to Belle on her fourth birthday, and the smaller one was actually hand-painted by my great aunt and is a real family treasure.  I hold my breath over that one every time we move.  The topiary is from TJ Maxx (raise your hand if you LOVE TJMaxx!) and is going on fifteen years old, but we don’t discriminate against the aged in this house, since the house is older than all of us put together. 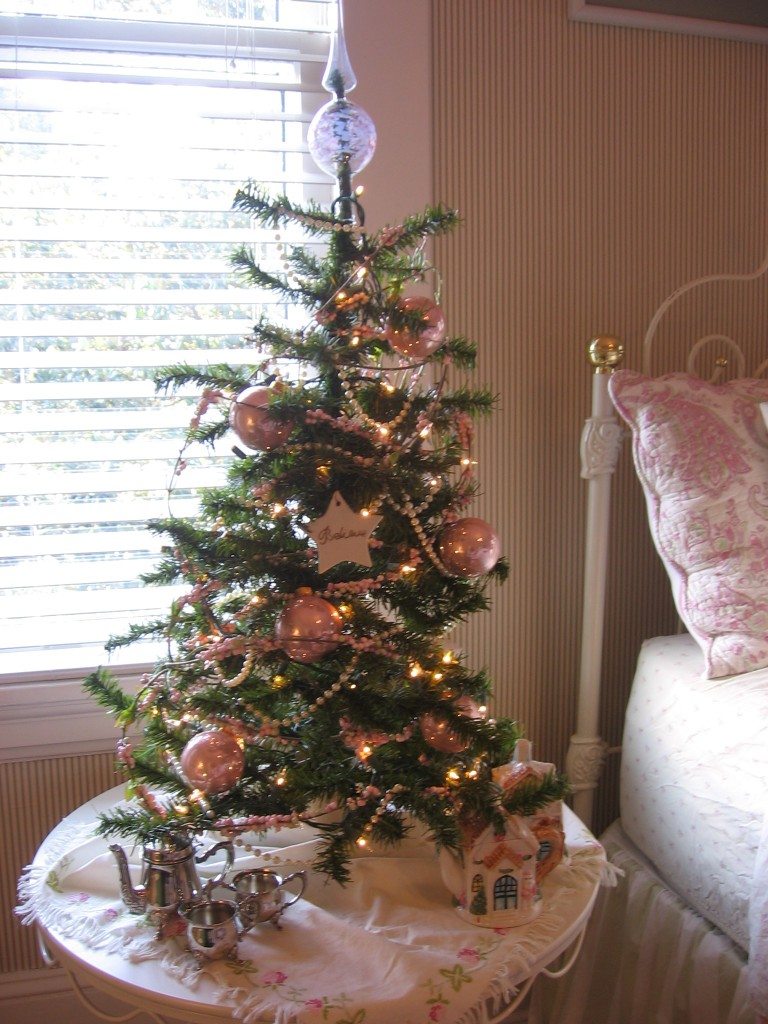 A quick aside on the tree:  it’s kind of a Charlie Brown tree this year, having lost several of its branches in our last move, but since we’ll probably be moving again next summer, I think I’d better hold onto it and buy a new one once we get there.  Also, since I find tons of Christmas decorations at yard sales, I can keep an eye open for a “new” one.   In the meantime, I stuffed it full of ornaments and other decorations and I hardly notice that it’s a little lopsided, although you might now that I’ve called attention to it.  I continued the tea theme (but did NOT beat it to death, I promise) with her silver tea set and a Christmas-themed set under the tree.  The Christmas set was from my mom and since she died before meeting her granddaughter, it’s extra special to me.  The tree skirt is actually a dresser scarf and it was embroidered by my grandmother, but I think I need a better camera for you to see the detail on it (Santa, are you listening?).

Oh, and do you see the bed in the picture?  That’s my old white iron bed, and I love it.  My daughter, on the other hand, does not.  She has asked me to paint it green or blue next year.  I will normally spray paint anything that sits still, but I have to admit that makes me nervous.  Any ideas? 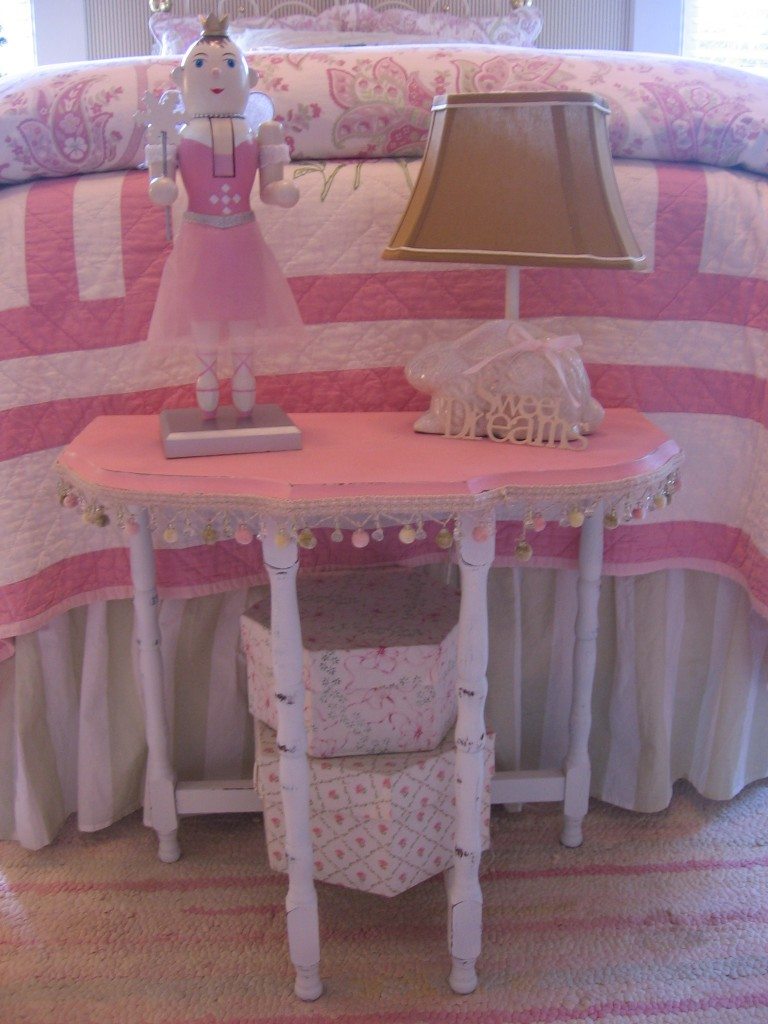 This is normally Annabelle’s bedside table, but of course I had to rearrange to put the tree in the window so it’s hanging out at the foot of her bed this month.  I actually snagged this little old table for $3 at a yard sale, painted and distressed it, and glued the pompom fringe around the top.  Love it!  (I wonder how it will look in green and robin’s egg blue?)  The Sugar Plum Fairy nutcracker is a reminder of our annual trip to see the Nutcracker—my daughter’s seen it in three different states already.  You can’t really see the quilt, but it was my great-grandmother’s and we think it’s almost one hundred years old.  I sewed the duvet cover out of two fabric shower curtains I found at Marshall’s.  My mother always told me I’d need to know how to sew, and as with everything else she told me, she was right.

“No Pouting.”  These are words to live by during the holiday season, aren’t they? 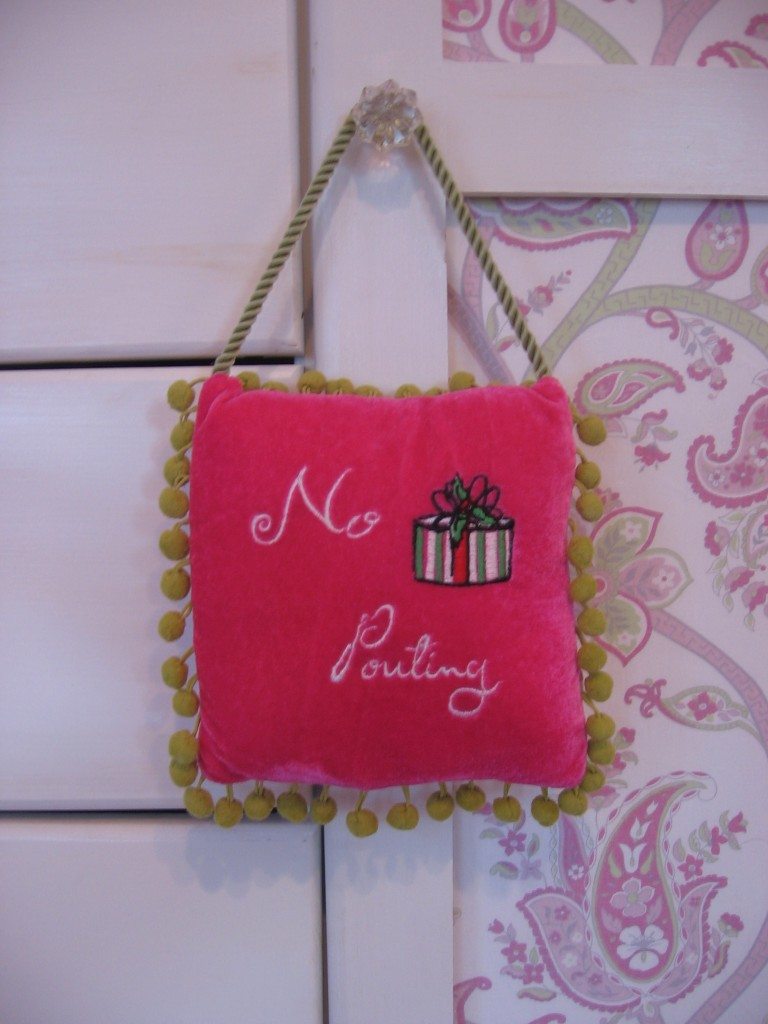 I made this dollhouse for my daughter last Christmas and I won’t lie, it was nearly the end of me.  It turned out great, although there were moments of despair along the way (and several bottles of wine consumed late at night).  The dollhouse has been decorated for the holidays, but only on the outside.  The residents are extremely messy and when I took a look today, the toilet was in the attic and the bedroom furniture was in the living room.  Some of them were missing articles of clothing, too.  It must have been some party! 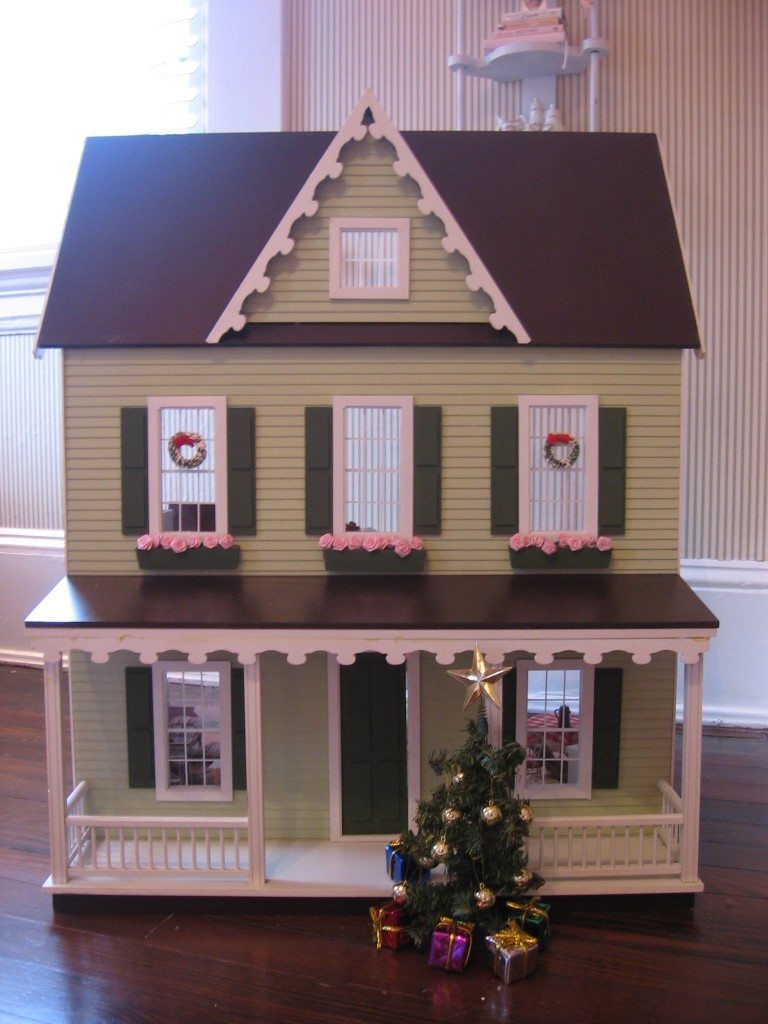 I have a few more pictures that I’ll post below without a lot of explanation; if you’re like me, then the more pictures, the better.

Thanks for taking a look around, and enjoy getting your home ready for the season! 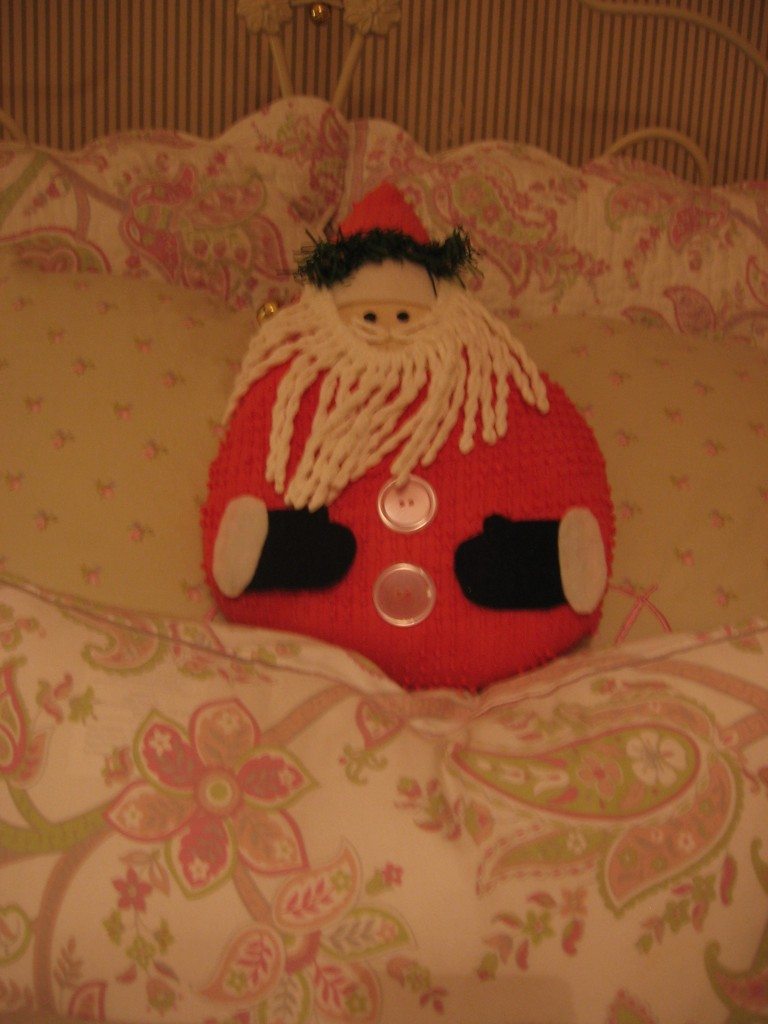 Santa Pillow (made by my talented aunt) 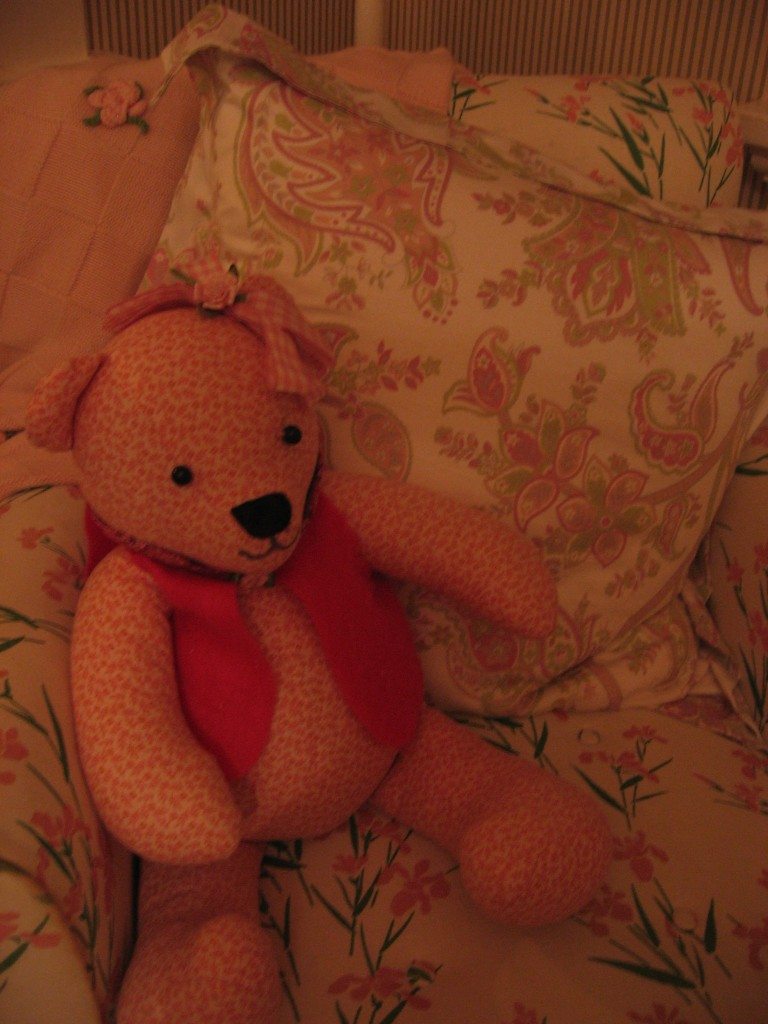 Pinky Bear (made by another talented aunt) 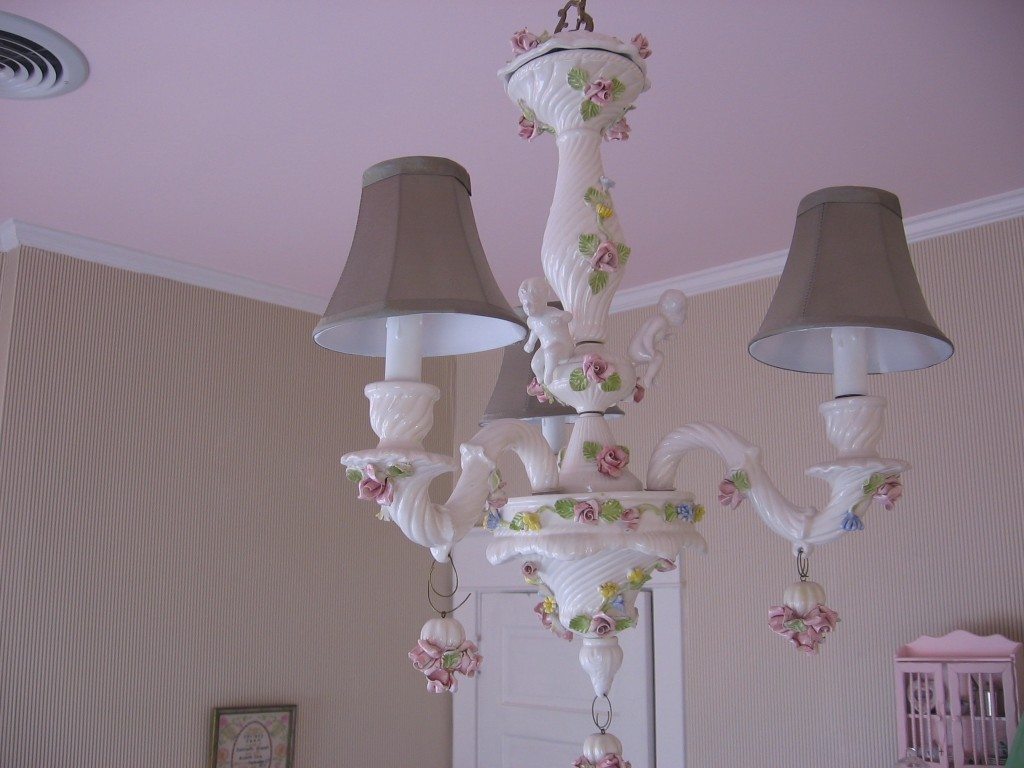 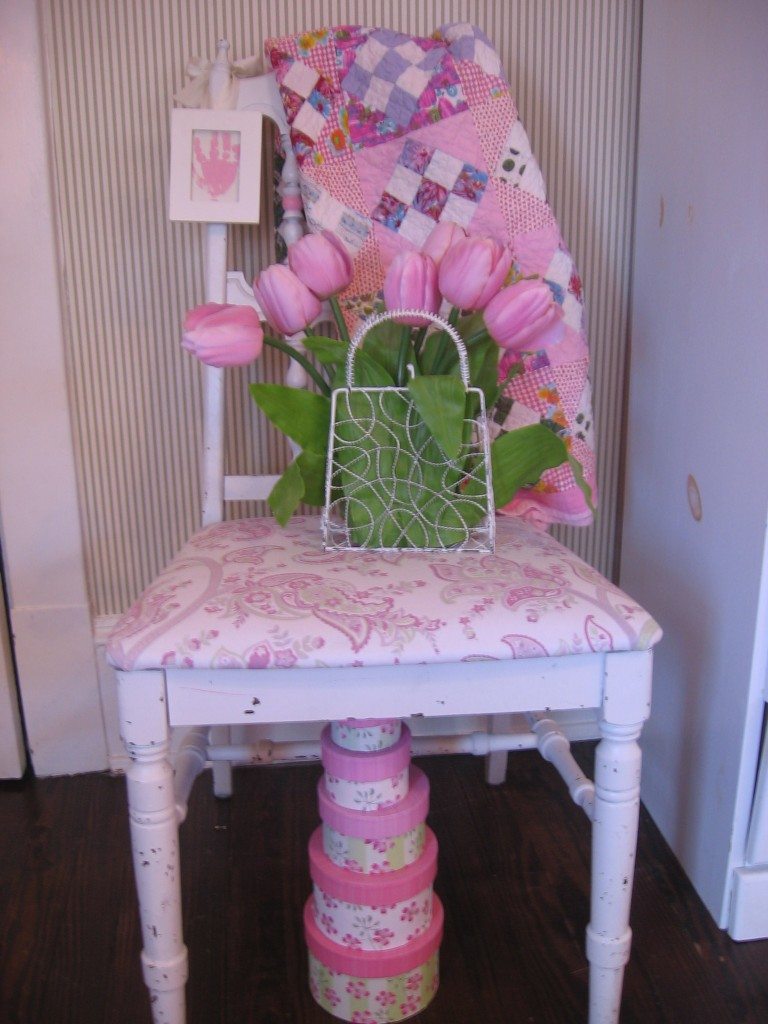