Last week, I got to check another country off of my bucket list when we took a quick trip to Sweden.

We flew RyanAir–a Europe-based airline that offers very inexpensive flights, so we were able to fly roundtrip for around $75 each. Stockholm was relatively expensive, though (it reminded me of Zürich, in terms of prices, at least), so we made up for that savings with our food and lodging costs.

You also have to fly without checked baggage if you want to enjoy the best prices, but fortunately I’ve gotten rather good about packing in a rollaboard. We were there Thursday-Sunday so I didn’t need too many outfits, even though I destroyed a pair of white jeans in a bike wreck (more on that further down).

We arrived Thursday afternoon and checked into our AirBnB in the Södermalm section of Stockholm, then headed straight back out for our scheduled time at the ABBA museum –my daughter and I are both big fans and had a blast–not sure about the rest of our party ;).

After the ABBA museum, we grabbed a late dinner at Meatballs For the People (they had super yummy food and cocktails!).

Friday we visited the Vasa Museum, which was probably one of my favorite museums ever. Inside is a warship (the Vasa) that sank in 1628 and was subsequently salvaged from the water.

In the afternoon we split up; the guys went to the Army Museum and Annabelle and I went to the Stockholm museum of modern art. They had some important pieces, and of course I also had to take a picture of the random blue square that you always find in a MoMA.

We synced up again as a family for a late afternoon bike tour of Stockholm; this is where my white jeans met their death and I almost followed along.

We were about 2 hours in and I was standing up on my bike to get up a hill, and as best I can remember it, my right leg just decided to trick out on me. This is how I know I’m getting old, my parents used to use terms like “trick knee” and I had no idea what that meant when all of my limbs used to do exactly what I told them to do! Anyway, I fell straight over on my side in a ditch that was conveniently soft and springy (and therefore muddy) from an earlier rain. The white jeans will never recover.

Of course I jumped back up and finished the last hour of the tour, but when I fell, I landed hard with my ribcage on the handlebars and was in some serious pain. As we returned to the bike shop, I fell again literally on the doorstep of the shop (exhaustion? pain? both?). I will admit that at that point I shed a few private tears of embarrassment because I really do know how to ride a bike, I was just hurt! My daughter reminded me that I would NEVER see the other three people on the tour again and my family whisked me off to dinner where cocktails and homemade pasta at Portofino’s made me forget my misery for a few hours.

And because you’re likely wondering, no, I didn’t go and get X-rays. I still can barely move but remember, I’m a nurse, and we never go voluntarily to the ER! (read about my German hospital adventure here) I figured that if I had internal injuries I would have bled out the first night, and that if I have cracked or broken ribs (which is likely, in my opinion) there’s nothing to do for them anyway. I have ibuprofen and epsom salts and that’s that!

I laid low on Saturday while everyone else went on a boat tour of the Swedish archipelagos, but I did venture out for dinner, which was another awesome meal; this time Lebanese (Tabbouli).

Sunday we headed to the airport early with my husband rolling my bag while I crept towards the check-in line. And guess who we ran into–the Austrian family from the bike tour that my daughter swore WE WOULD NEVER SEE AGAIN. Liar.

Stockholm was a 10/10 and definitely makes the list as one of my favorite cities (as always, let me know if you are planning travel there and have questions), but I definitely can’t recommend the bike tour (lol).

I’m off to medicate; thanks for stopping by!

PS Yes my horrible family took photos (and possibly video) of my bike wreck but they know better than to share them–ever! 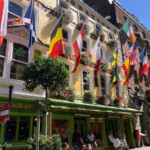 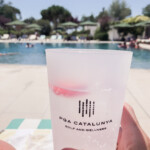 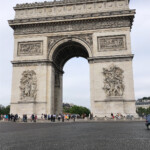 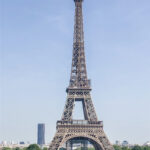