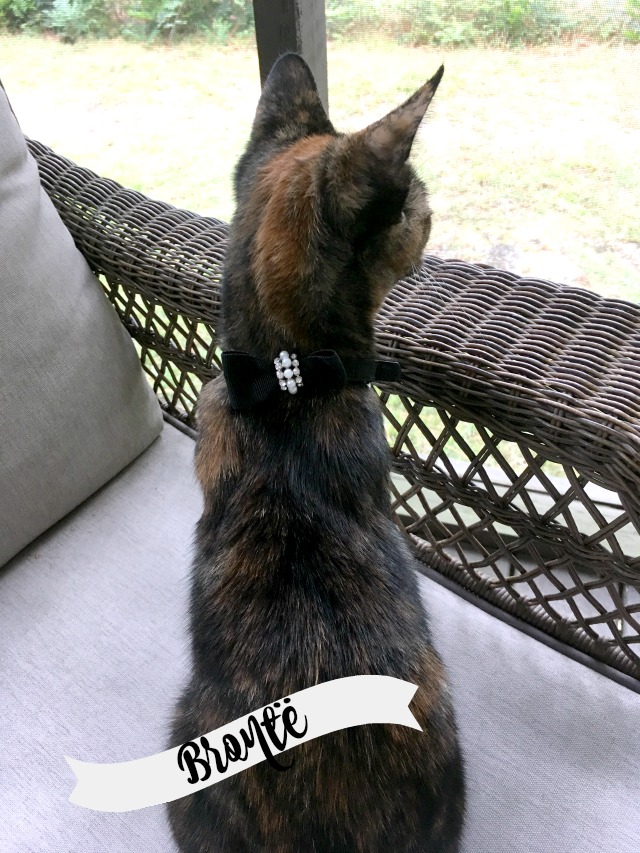 Happy Sunday, friends!  If you follow us on Facebook, then you already know that we have a new furry family member, but I wanted to share a few photos of our sweet new rescue kitty. 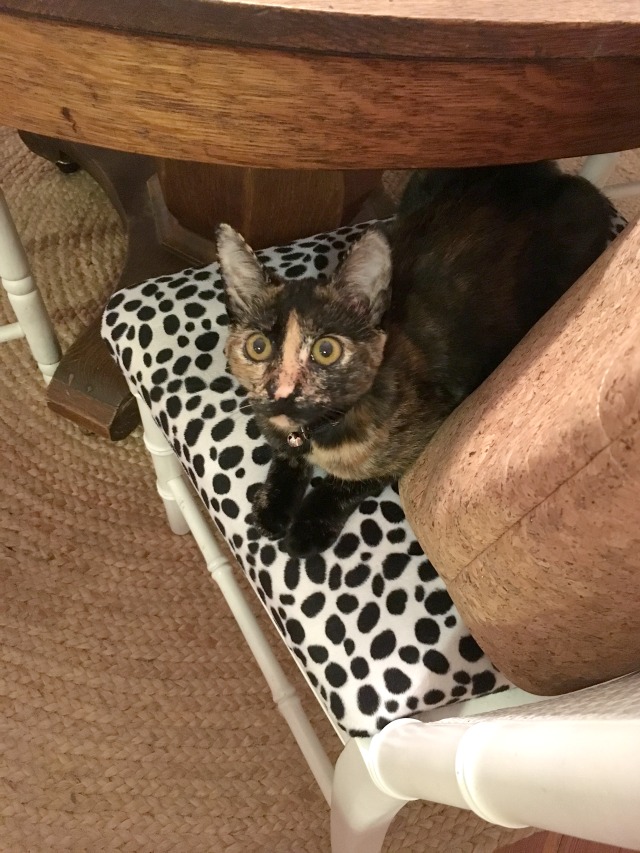 I meant to get this post up yesterday, but I woke up with a migraine already in full force and literally was stuck in bed until after noon.  I’ve had migraines since I was a child, although thankfully they’re a lot less frequent than they used to be, but yesterday’s was a doozy.  Usually I can take my prescription as soon as I know one’s coming on, but when I wake up with them I’m already behind the pain management eight ball. My son took the ACT yesterday morning, and I was so thankful that he can drive now–I’m not sure if he would have made it if he’d had to depend on me!  Anyway, I digress.. 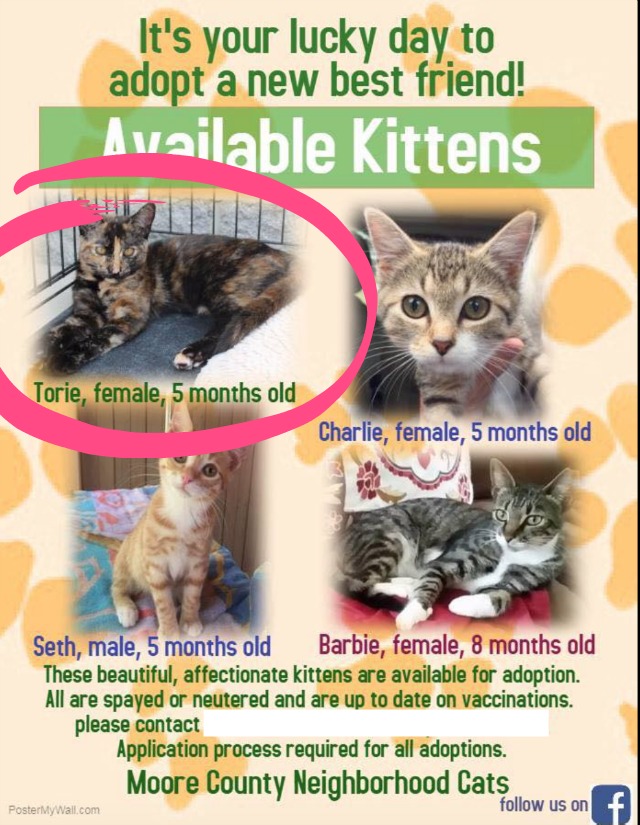 We’d been contemplating getting a cat for awhile.  Harley has been lonely since we lost our cat, Tinker, about three years ago, and Sunny, our other golden, about 18 months ago.  It’s no fun being an only dog when you’re used to living in a pack!

We don’t have a fence right now, and Harley loves his four walks a day, but you never know how another dog is going to do in that sort of situation, so we decided to look at cats instead. Plus, Harley absolutely adores cats. 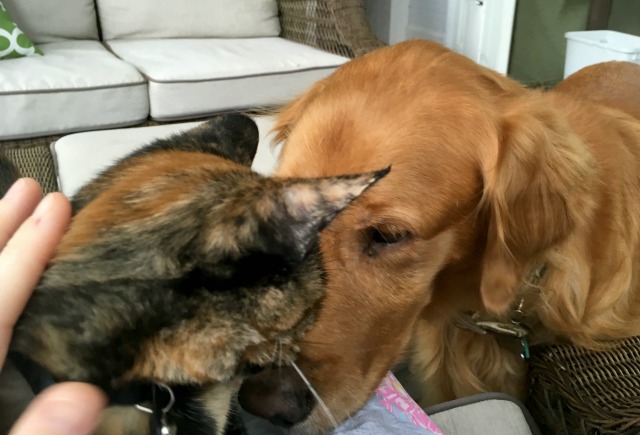 My friend, Leslie, called me last Saturday to tell me that our local rescue (Moore County Neighborhood Cats) was holding an adoption event just down the road from us.  I was actually intending to adopt an adult cat as I know it can be harder for them to find homes, but this little tortoiseshell “teenager” literally chose us.  She had already been exposed to dogs, so I knew that would make the introductions easier.

She immediately made herself at home. 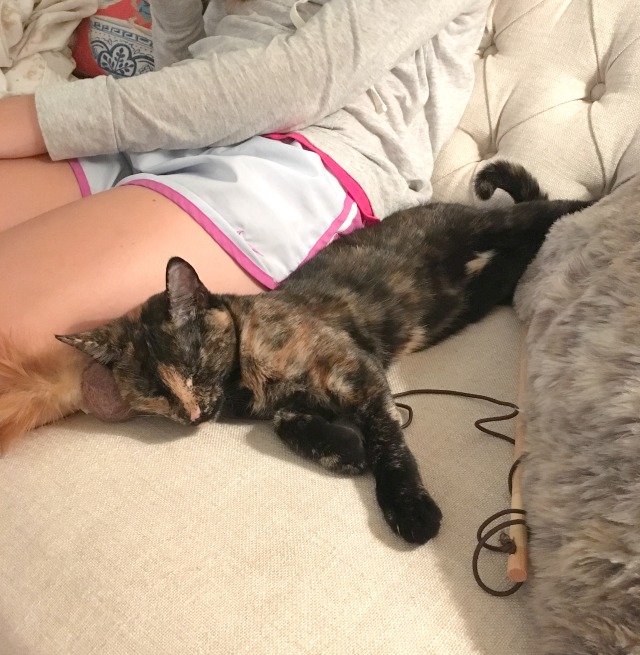 I’ve mostly had tabbies before and never realized that “torties” are known for being friendly and loving.  She is most definitely a lap cat and her favorite place is snuggled up to one of us. 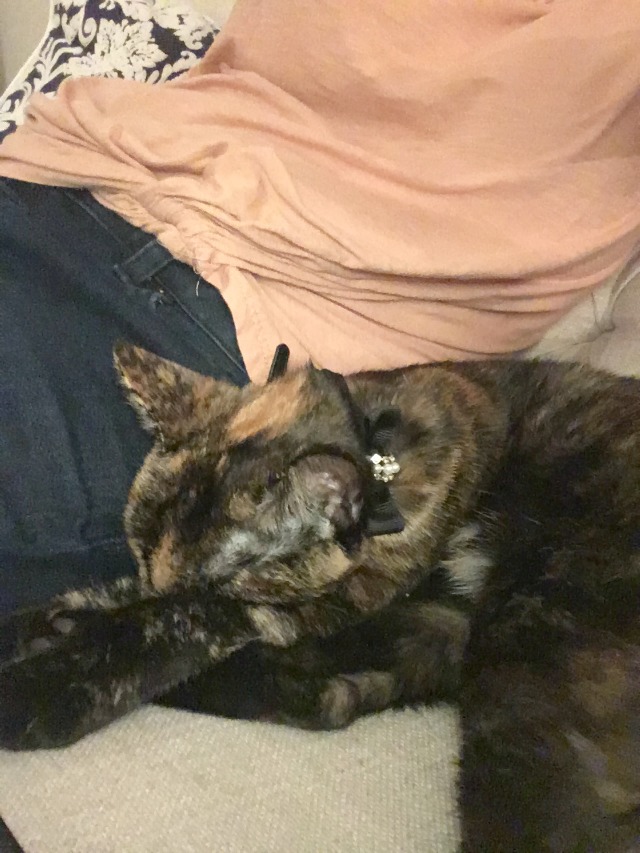 I let Annabelle choose her new name (they were calling her Torie) as she was the driving force behind the adoption of our new kitty.  It took her a few days, but she narrowed it down to three choices:  Giselle (for the ballet), Brontë (for her favorite authors), or Panera (yes, she would name a cat after her favorite restaurant!).  I like Giselle best, but apparently Brontë is the top pick. 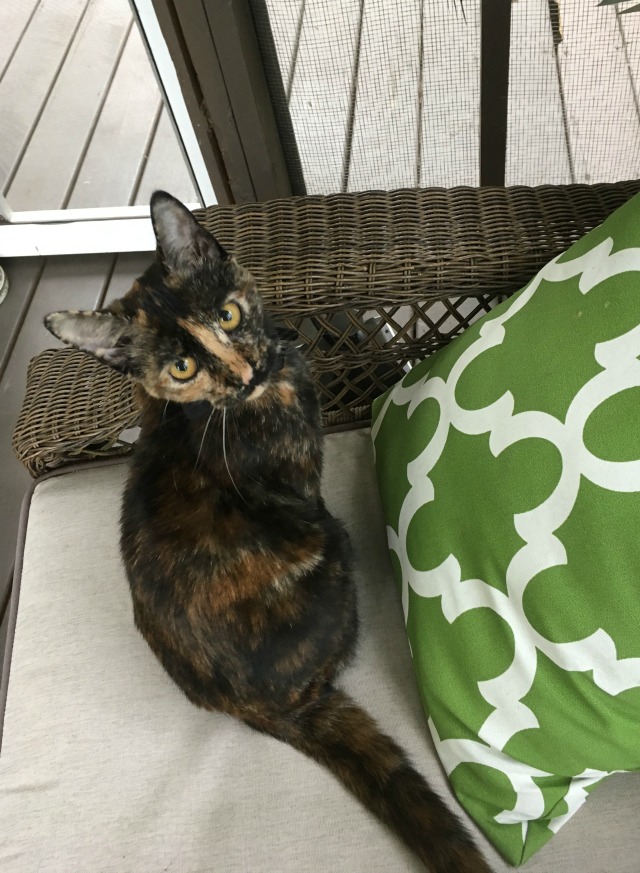 Brontë seems generally pleased and even rather smug about her new name and circumstances. Harley is ecstatic. 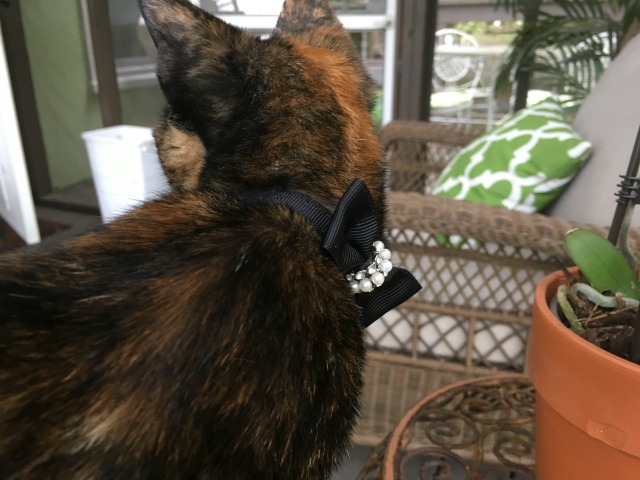 She’s all up to date on her shots and was spayed before we adopted her.  I took her for her microchip on Friday and she has a fabulous new collar (here, affiliate link). She’s a perfect fit with our family and Harley has perked right up now that he has a friend to snuggle with, so everyone is happy!