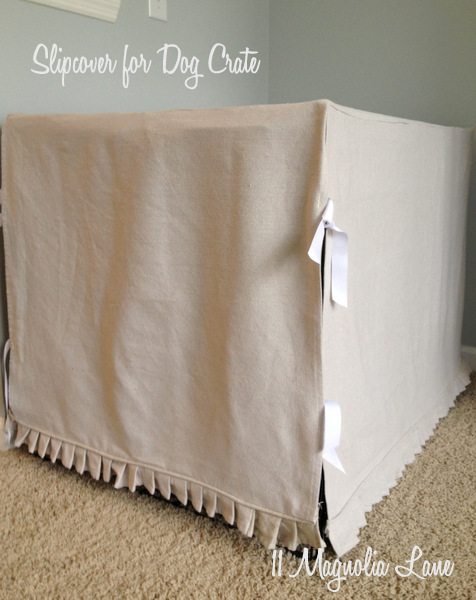 If you’ve been hanging out with us for any length of time, you know that I live in a zoo, with two kids, two rescued golden retrievers, a senile cat, a hamster, and two tadpoles (soon to be frogs).  Notice that I did not mention my long-suffering husband, because he is a fellow zookeeper rather than an inmate!

Not too long ago, I built a doggie gate out of old window shutters.  I loved how that turned out, and even mentioned at the end of that post how I needed to come up with an idea to hide the super-huge wire crate that Harley likes to sleep in.  Sunny doesn’t have one–some dogs love them and some could care less, and he’s a could-care-less kind of guy, which is great because two dogs crates would take up half of my bedroom!

I didn’t take a before picture of the dog crate.  You know what they look like!

First, I measured and jotted down all the dimensions: 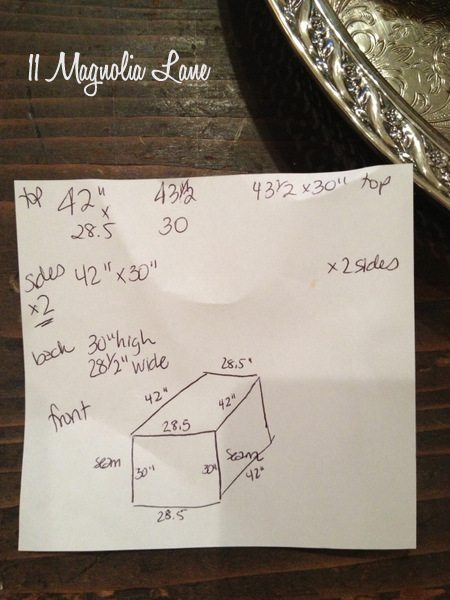 I decided that the front panel of the crate (that covers the door) would only be attached at the top, so it could roll up for Harley to look out, or down to hide the crate when he wasn’t in it.  I used my old standby–canvas painter’s dropcloths from Home Depot, both because I already had one draped over the top of his crate, and because that’s an easy way to get big yardage of fabric inexpensively.

I am a terrible seamstress, so please forgive me for not going into great detail here.  I cut rectangles of fabric for each of the four sides and the top of the crate, leaving an inch or two extra for seam allowance.  I also used the already-finished seams on the dropcloths for the fronts of the two sides and the sides of the front roll-up piece.

The cutting took awhile, because some members of the family, who shall remain nameless, thought that I was rolling out a blanket for them to lounge on and derailed the entire process: 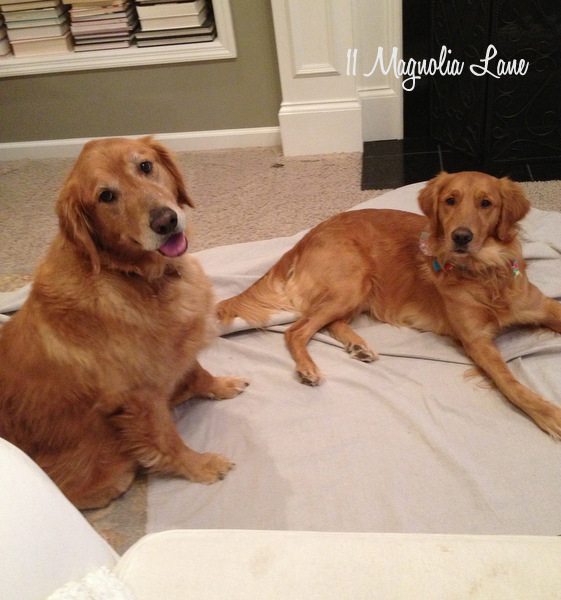 (By the way, if you’ve been following Sunny-the-train-wreck’s surgery and recovery, we are going to the vet this week for follow up X-rays and a weigh-in.  His last weight was 110 lbs, down from 140, and he wants you to know that he has not had a single piece of fried chicken since he came to live with us in December!  He would really like someone to smuggle some in to him, though…)

I pinned all the wrong sides together on the crate (so the slipcover was inside-out) and then sewed the seams.  See the already-finished edges on the front? 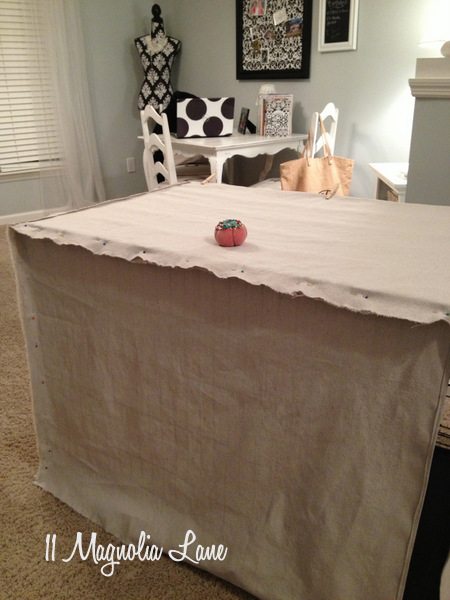 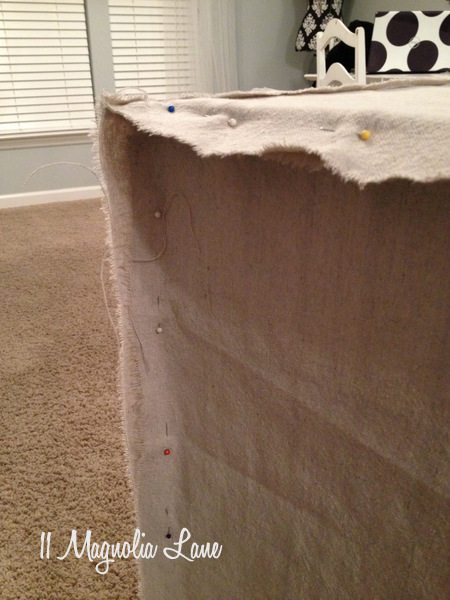 I decided to add cording and a little knife pleat to the bottom, because Harley is confident in his masculinity (despite being neutered).  I figure that she who buys the kibble gets to make the decorating decisions!  Miss Mustard Seed does a great video series on sewing slipcovers (for chairs, not dog crates) and the one where she talks about making piping/ cording is here.

I used the already-hemmed edge of the slipcovers again when I made the knife pleat.  I don’t use a ruler or any sort of system when I fold pleats, because I am a slacker.  The last step was to sew ribbons on the front and sides so that when the front door is rolled down, everything looks neat.  Here it is rolled up, complete with dog: 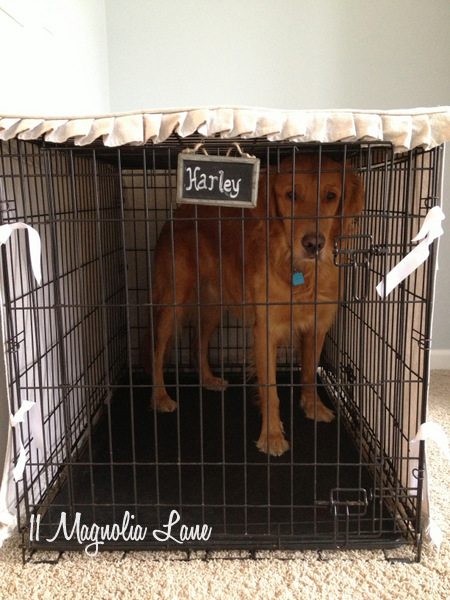 And here it is when we’re trying to disguise it to make it look like an enormous side table. 🙂 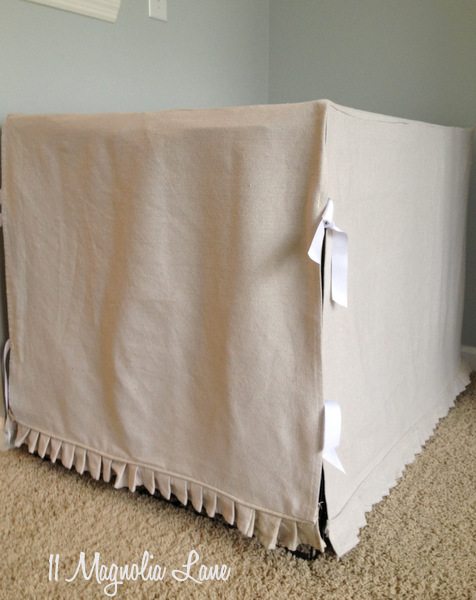 Here’s a side shot…the front door is bent out a little from an attempted jailbreak, so that’s why there’s a bit of a gap: 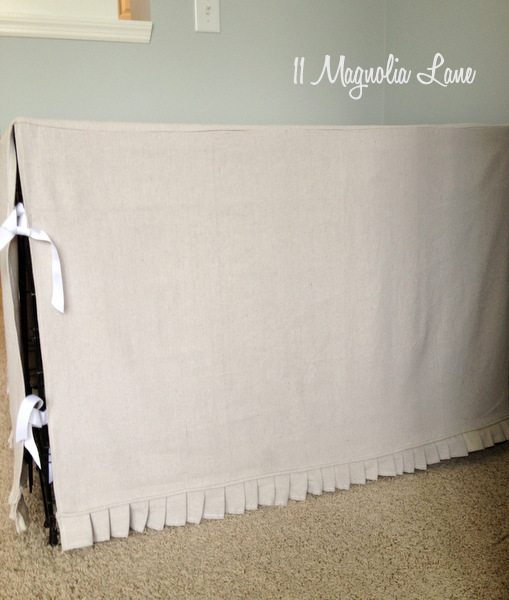 Although this dog crate is the size of a small house, if you actually have a normal-sized dog and crate, this would really work to camouflage it.  The best we can hope for is to make it look less big, black, and wiry!  I’m pleased with how it turned out, and Harley couldn’t care less, as long as there’s something on the sides to keep him hidden from the world while he sleeps.

Has anyone tried anything else to disguise a crate? 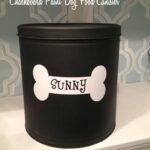 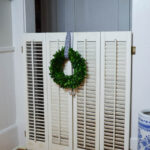 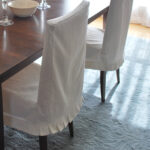 Sometimes it works...and then sometimes...