Happy Monday, everyone. I wanted to give you just a quick update on how things are unfolding over here in Germany.

First of all, the best news is that after almost 6 weeks apart, Harley has arrived!

He was originally scheduled to fly over two days before us, and then board at the airport until we arrived. Our amazing sponsor picked us up in a huge duty van and since Harley’s crate is large enough to hold a pony, it would have made things so easy to load up together and head to the hotel for quarantine.

We had several scheduling hiccups, and then the Frankfurt pet lounge closed for two weeks because of some Covid cases among their workers. I was starting to lose hope that we would get him over here at all. Since he’s a rescue, he’s a bit clingy and I hated to think of him wondering if he’d been given away again.

The silver lining was that our dear friends in North Carolina kept him for us, so I never had to worry that he was stuck in a kennel for weeks on end. They have two Yorkies that he considers part of his pack, and he made himself at home (I owe them at least one cake and one loaf of bread; the Yorkies are too tiny to countersurf so we know for sure who the culprit was!).

Finally, everything came together this weekend. He got picked up in Cary around 11am on Saturday, had a car ride to Atlanta, and we met him at the Frankfurt airport around 7pm on Sunday. We had to rent a great big van to transport his crate, and drove 3 hours each way in pouring rain to get him, but of course every dollar and every mile was worth it.

Here’s a blurry picture of the reunion:

We didn’t get home until about 11:30pm, so while I meant to share a big long post about how everything has gone this first month, I ran out of time.

Here are the highlights, though. First, we’re still living in a hotel. We think we’ve found an apartment in Stuttgart, but the housing office on base has to review our contract and they’re very busy so we have to wait a few weeks for that appointment. Our things haven’t arrived yet so if they’re not here before we move out of the hotel, the military can give us some basic loaner furniture to use while we wait.

Our daughter started school last week. They are in-person five days a week but with some precautions in place, like wearing masks and having one-way traffic flow through the halls. Her first day of school was a little dramatic when the bus driver drove right past her at her stop instead of picking her up, but the front desk was lovely and called a taxi for us and she arrived only a few minutes late. She’s already made a few friends and is hoping to start visiting dance studios next week.

My Beetle arrived from the States completely dead and I wasn’t thrilled that the company we paid $2K+ to ship it over just rolled it off the transport truck and left us with it in a parking lot (someone also broke open the fuel door and siphoned every drop of gas out of the tank while it was in transit). So far we’ve had it towed twice, replaced the battery and the alternator, and now the VW dealer is trying to figure out if the main problem is the engine control unit or–fingers crossed–something less expensive. We’re working through our insurance company on this one, since my German is limited to about three sentences and doesn’t including car terminology!

Speaking of which, I am trying to work on my German every day but it seems like most people I run into speak English much better than I speak German, so it’s making me a little lazy. I also realized it’s hard to pick up a new language when everyone is wearing masks and you can’t see their mouths!

Lest it seem like all I do is complain about some of the wrinkles that inevitably come with an international move, let me say that there is so, so much to love here. First of all, the view out of our hotel window is amazing. The German sky and clouds are gorgeous and people have beautiful gardens and balconies. Second, the bread, wine, and fresh vegetables are excellent. I am thankful that we walk a lot or I would gain weight for sure! And last but not least, our military family has been so helpful and welcoming as we transition to the expat lifestyle.

Thanks for all the good wishes on Facebook about Harley–I appreciate them so very much! 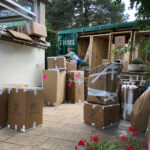 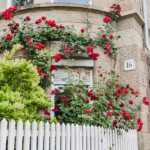 A Walking Tour of Stuttgart