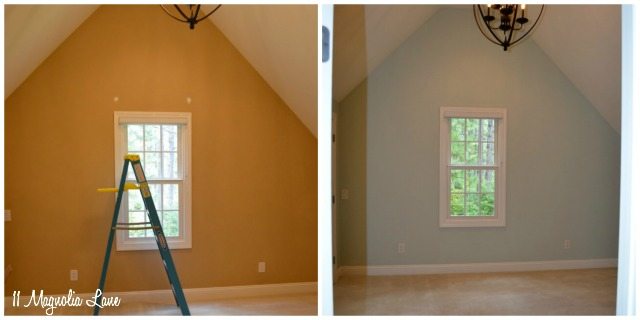 As I mentioned in this post, I took a quick trip up to North Carolina right after Memorial Day to paint a few rooms and have my “orientation” to our new house and all of its systems–things like how the water filter works, where all the cold air returns are located, and troubleshooting the appliances, lighting, and sound systems.  Given the fact that I was there for just over 24 hours, I’m pretty impressed that we also managed to paint the kitchen, the laundry room, and my daughter’s bedroom!

While I’m sure there will be lots more to come in the months ahead, here’s the progress we made in my daughter’s room. 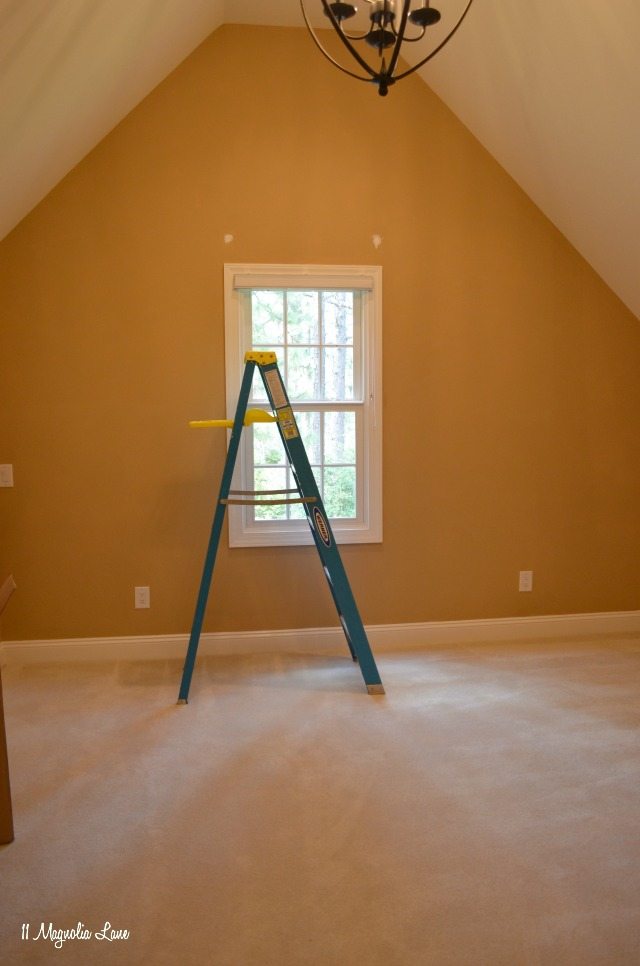 We’re allowed to paint whatever I want with the understanding that if I’ll paint it back to a neutral when it’s time to list the house again.  Since I tend to go for neutrals anyway, I doubt that will be a problem, but paint is such a quick and inexpensive way to change a room that I have absolutely no issues agreeing to that!  I used my HomeRight PaintStick and it cuts my painting time down by hours since I don’t have to continuously reload the roller! 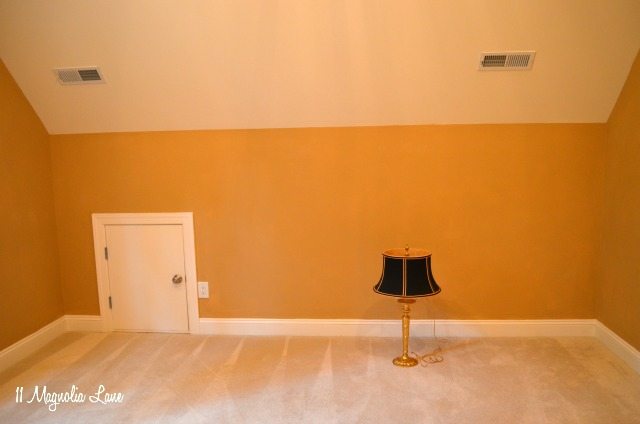 The cathedral ceiling gives the room an interesting layout, since the two side walls are shorter than usual.  Her headboard will fit without any problem, though. 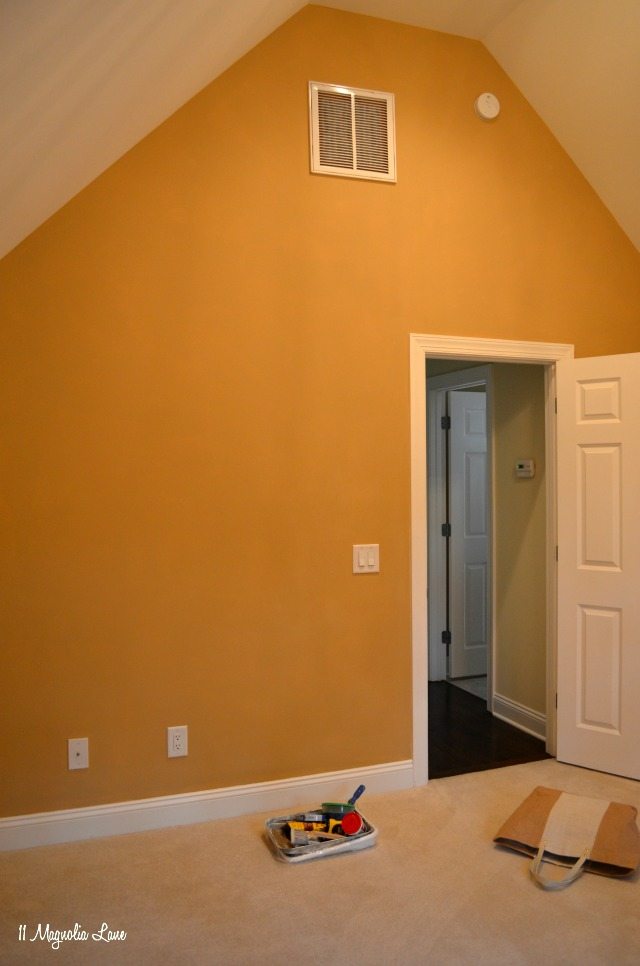 The other side wall has two closets and a little niche.   We debated on putting her desk vs. her dresser there; I think the desk will win out. 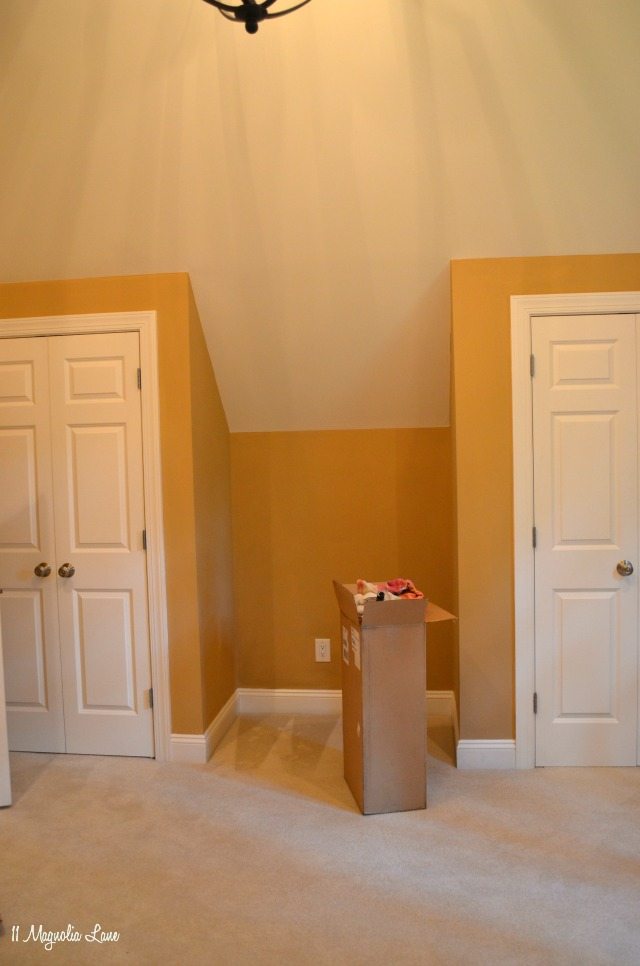 Her room now is painted in Glidden’s Almost Aqua (see more photos here), but we went a little lighter for this space and used Sherwin Williams’ Sea Salt. 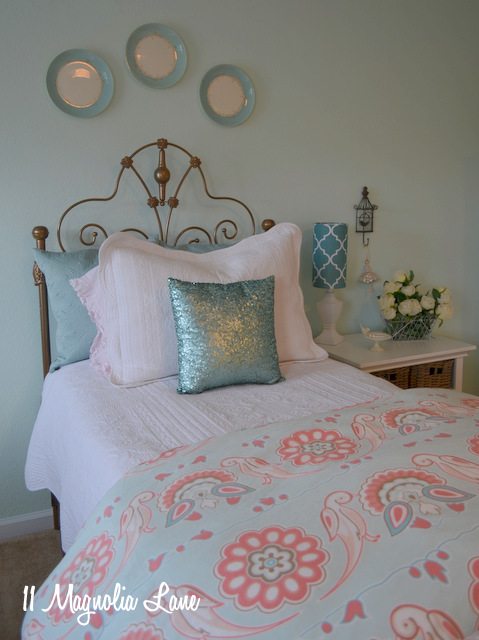 Sea Salt is one of my favorite paint colors; depending on the light, it looks grey, green, aqua, or even white.  This room has only one window, so not a ton of natural light, but a large chandelier and two can lights to provide plenty of artificial light.  Here’s how the Sea Salt looks: 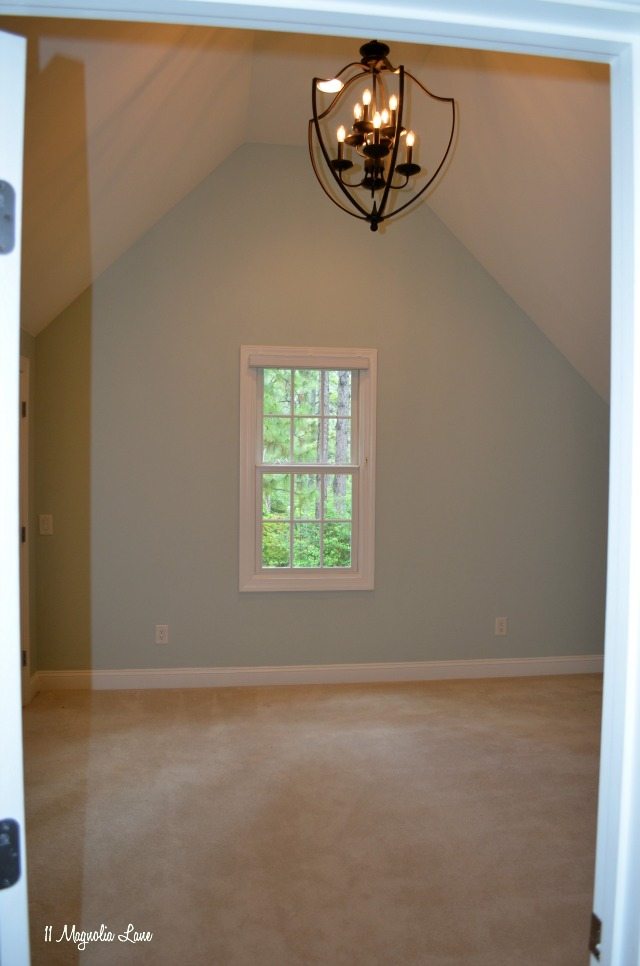 Don’t you love that chandelier?  I think her loveseat will go under the window. 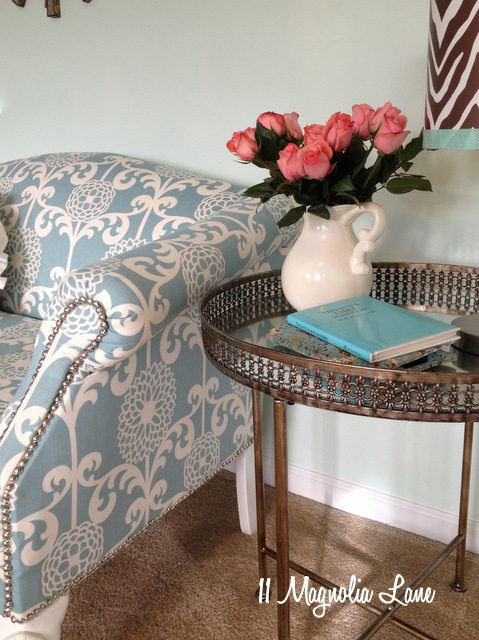 And her bed will go on this wall.  We’re going to switch things up a bit and put the queen in here and her twin in one of the guest rooms. 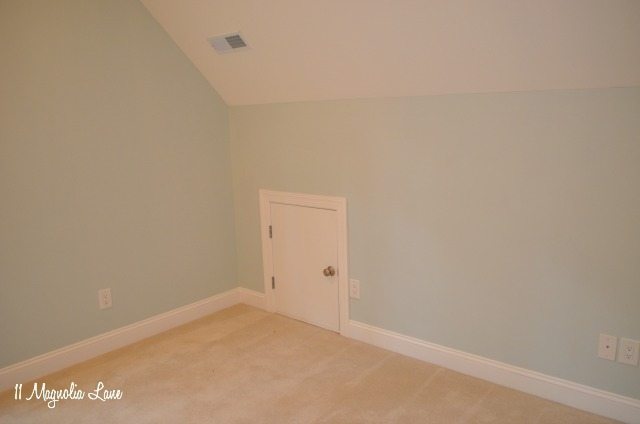 The little door opens to storage under the eaves; there’s another one on the other side in her closet: 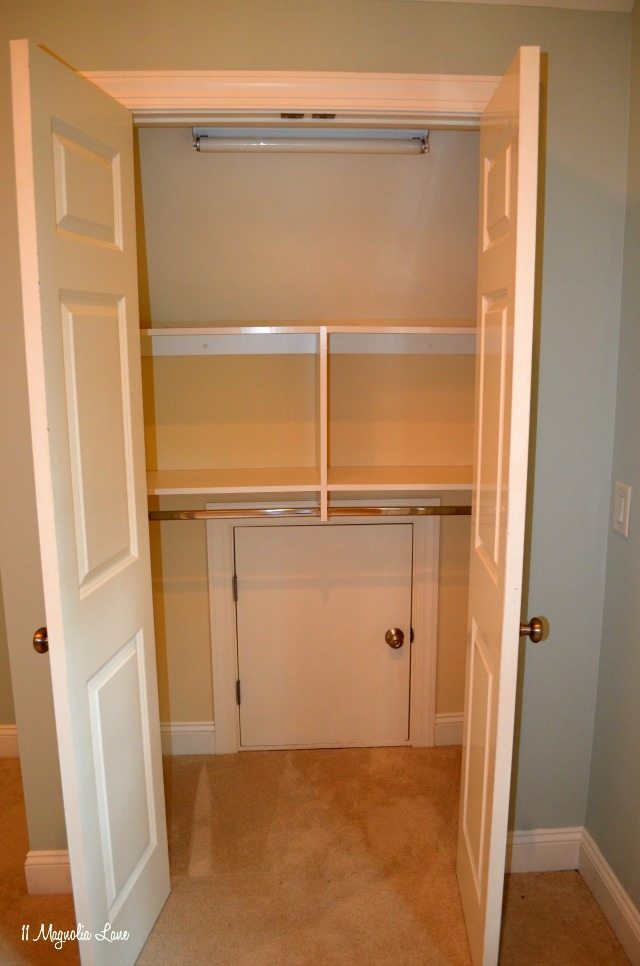 I’m not sure what I’ll do with all the storage space in this house, but what a nice problem to have!! 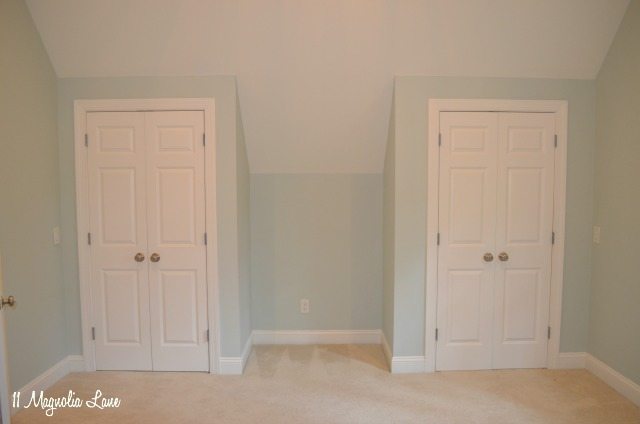 Above is the niche where I debated on putting her dresser: 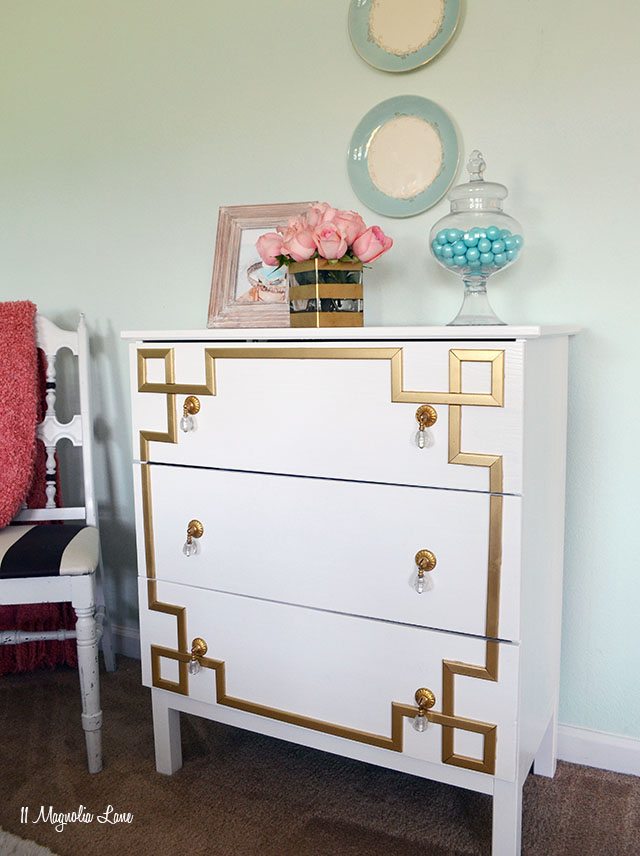 But like I said, I think the desk won: 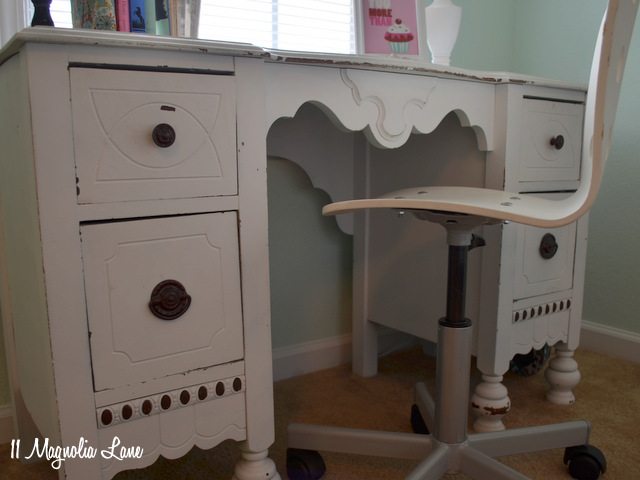 So the dresser will go on the wall with the door: 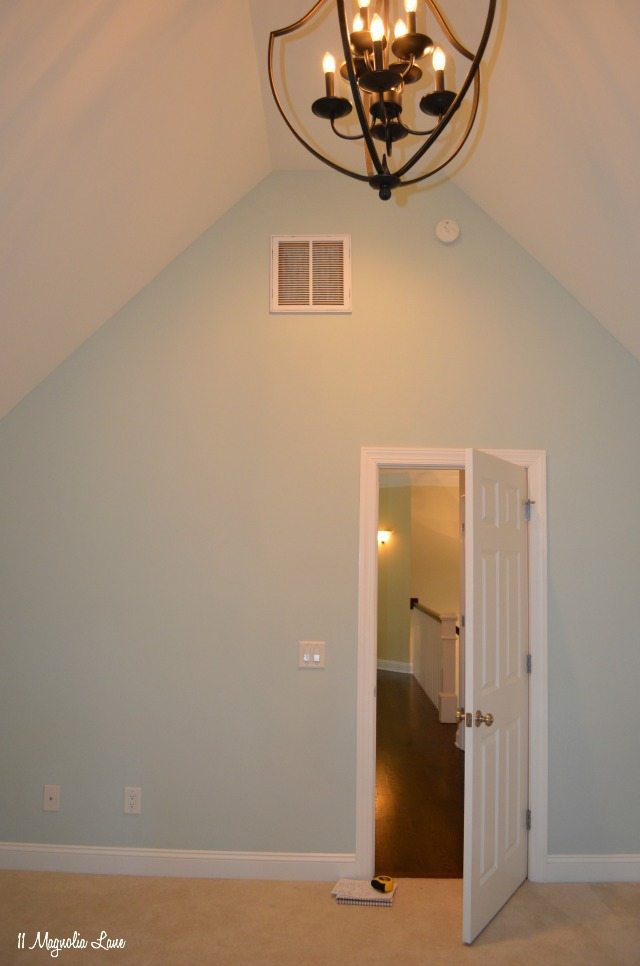 I always try to get the kids’ rooms done quickly when we move so their new house starts feeling like home.  They’re both pretty sad about leaving Savannah, but at least she’s excited about moving in and decorating (yes, she’s truly my child!), and I am, too.  Slowly but surely, right?!

PS The other posts on this house are {here} if you want to see more.

Thanks for stopping by–