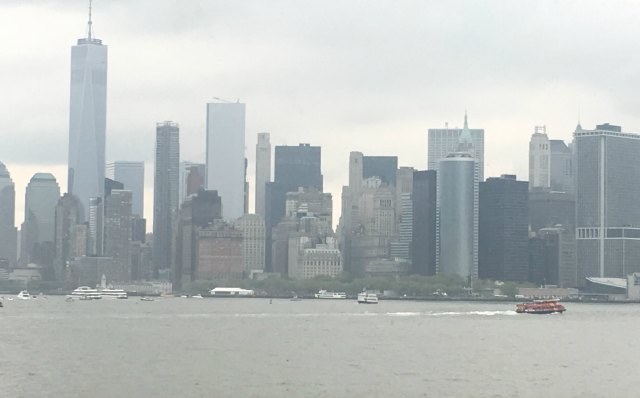 We took a quick trip up to New York City last weekend, for Mother’s Day and just because–and I thought I’d share a bit about our stay.

My son and I were in Boston just a few weeks ago (we went on the 10th grade class trip with his previous school in Savannah), but my daughter hasn’t flown since she was a baby.  Needless to say, the plane ride might have been the most exciting part for her, although all of the escalators, elevators, and moving sidewalks were right up there.  I know, she needs to get out more!

The nicest part about being twelve in the airport is that you don’t have to take your shoes off to get through security, and they don’t give you the full body-cavity search that the rest of us endure. 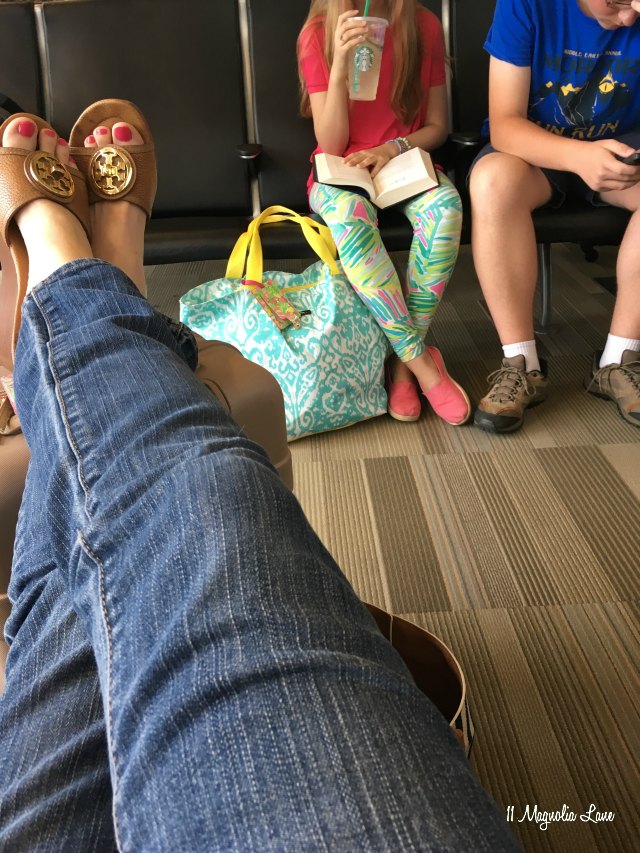 I graciously gave her the window seat.  She followed those seatbelt lights to a T:  when the captain turned off the fasten seatbelt sign, she unbuckled, even though she wasn’t standing up.  🙂  She had it figured out by the trip home, though. 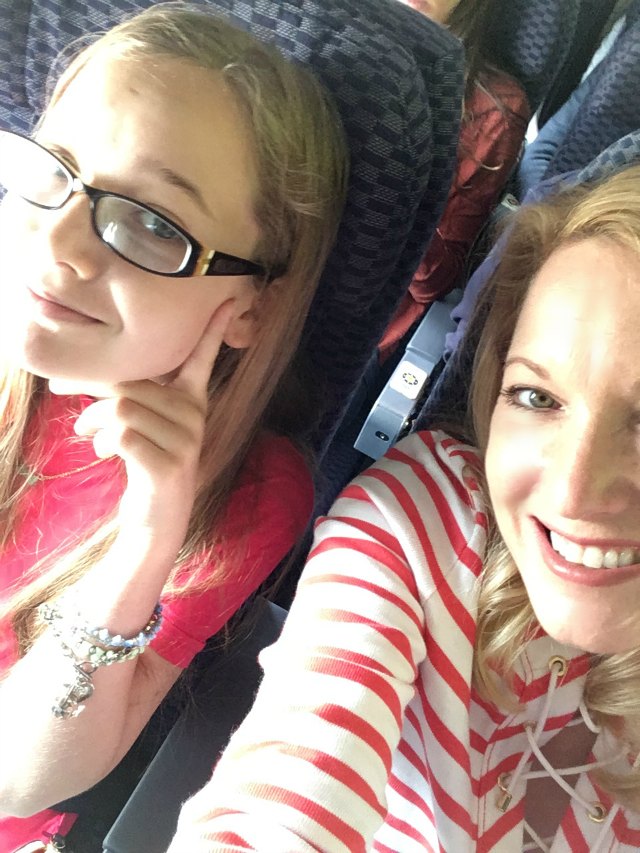 We flew into Newark; the views of Manhattan on approach weren’t as good as they are at LaGuardia or JFK, but since we were heading up to West Point first to pick up my husband (he’d been there all week for work) we needed to be able to rent a car and head north without getting stuck in city traffic.

Apparently the pigeons are quite at home in the Newark airport; we had a good laugh over  this fellow who was visiting Dunkin Donuts: 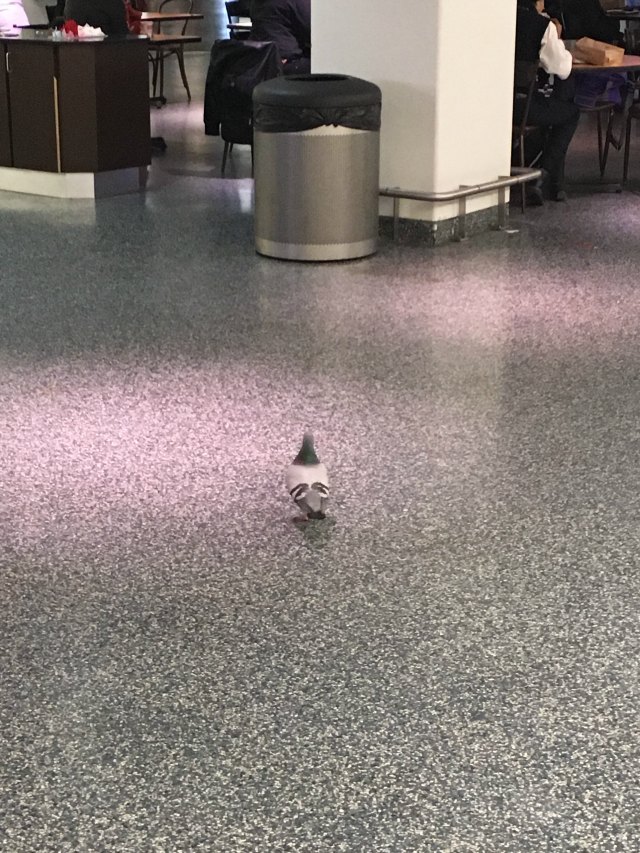 We stayed in the historic Thayer Hotel at West Point.  My husband didn’t go to school there so this was my first visit, and it’s an absolutely gorgeous campus.  We both hinted to Connor that this might be a good college to consider in a couple of years! 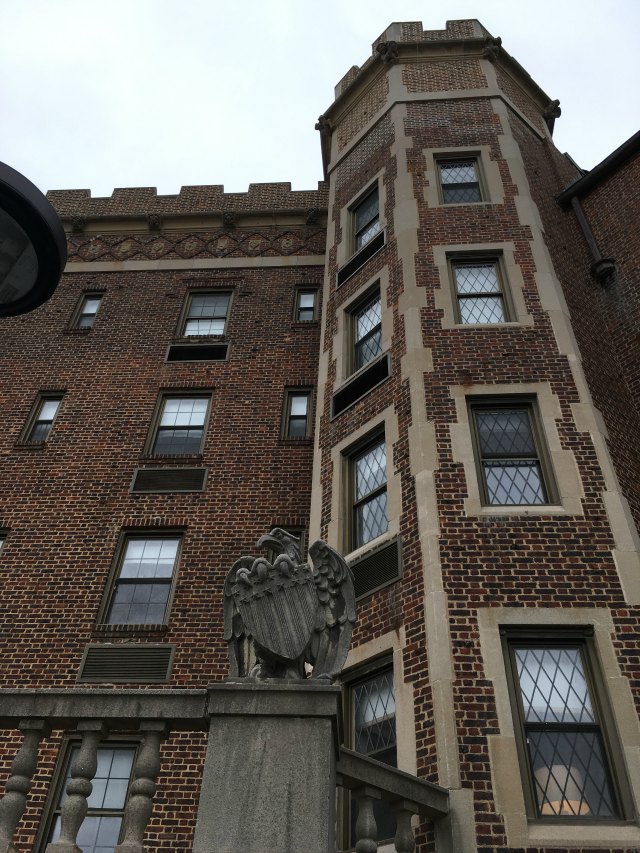 You can see that we had pretty depressing weather, especially since we had to leave our flip flops at home and pack coats and umbrellas for our trip, but we still managed to get out to the rooftop bar for a cocktail.  I’m sure this is the place to be during football season–check out that view of the Hudson! 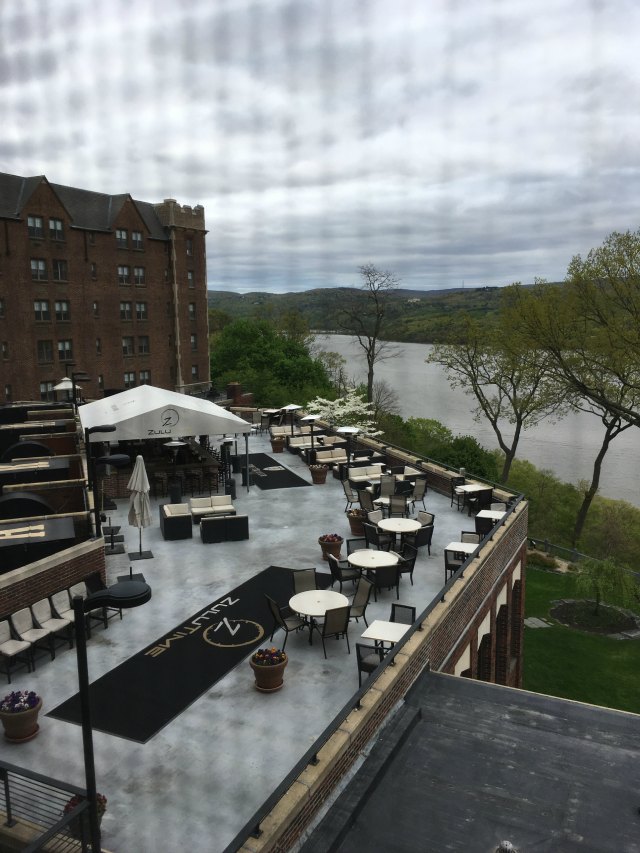 The hotel was hosting the class of ’66 reunion.  How cool is that?  A fifty year reunion…we saw some retired generals that we recognized from the news, but I’m not naming any names.  Those guys were impressive–lots of them were out running in the morning, even at 70+. 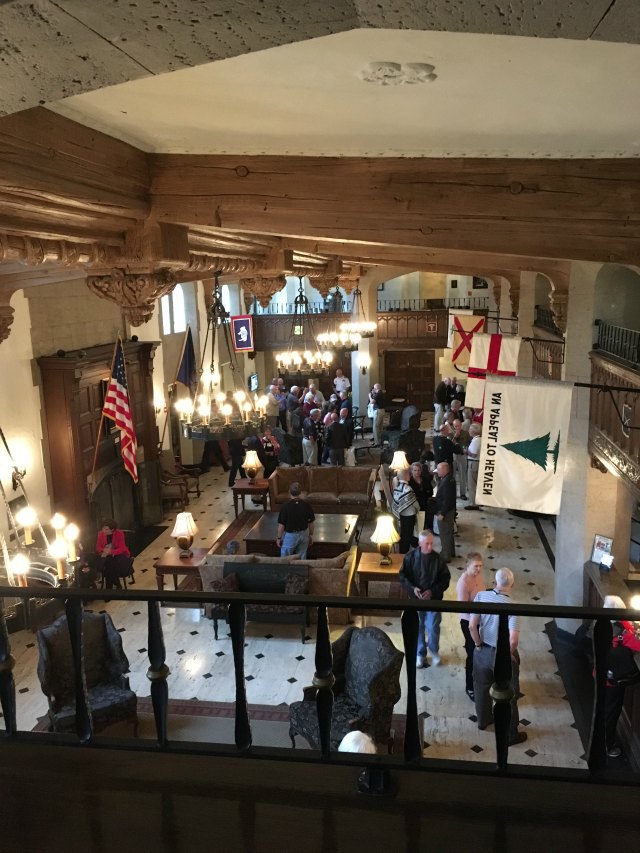 We enjoyed a yummy dinner in MacArthur’s restaurant–check out that charcuterie platter–and ran into several people we know.  It’s a small Army! 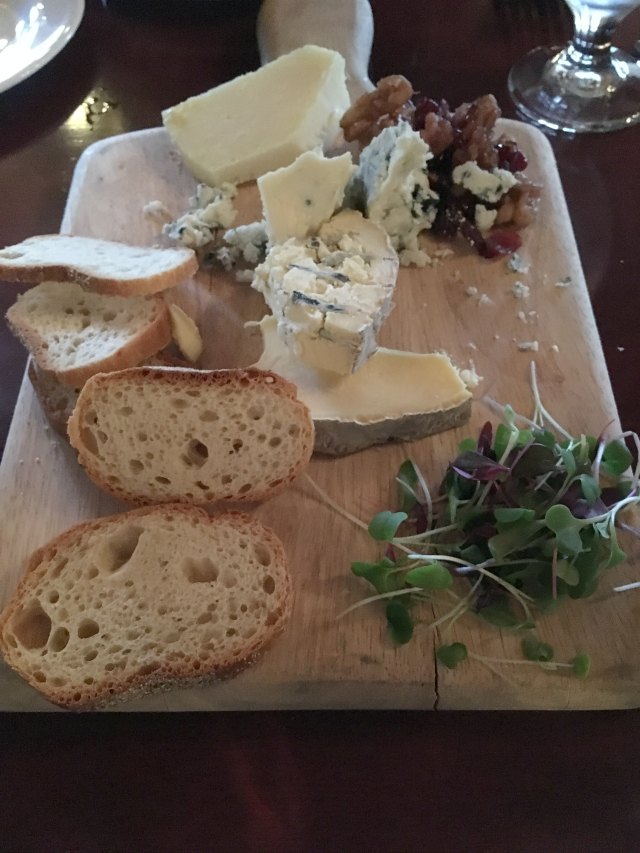 The next morning, my in-laws joined us for a cadet-guided tour of the campus in the pouring rain, and lunch in the dining hall.  Mid-afternoon, we hopped on a train to the city and disembarked at Grand Central Terminal at about 4:30 on a Friday afternoon.

Can I just say that again?!  Grand Central during Friday rush hour.  And we were towing luggage.  It was insanity!  Picture my southern children, who move at a leisurely pace and have been taught to yield the right of way out of politeness, dropped into the middle of the madding crowd that’s New York.  I’m still amazed we didn’t lose them!  Oh, and if you were commuting home in NYC that day, I’m really sorry about that escalator backup.  Tourists!

I grew up riding the DC Metro, but New York is so big that we would have been lost without our iTrans app (thanks to my friend Jayne for recommending that we buy it.  I owe you a cupcake).   We hopped a red line train downtown to the financial district and our hotel, and bolted dinner nearby so we could get back uptown to Lincoln Center.

Annabelle and I got to see the New York City Ballet (cue the angels singing), and the guys went to see the Met Opera perform Othello, both at Lincoln Center.

It was so cold out that Sis had to wear jeans under her dress, but she took them off in the restroom so she could be appropriately attired during the ballet.  Tiler Peck was dancing–my girl was in heaven! 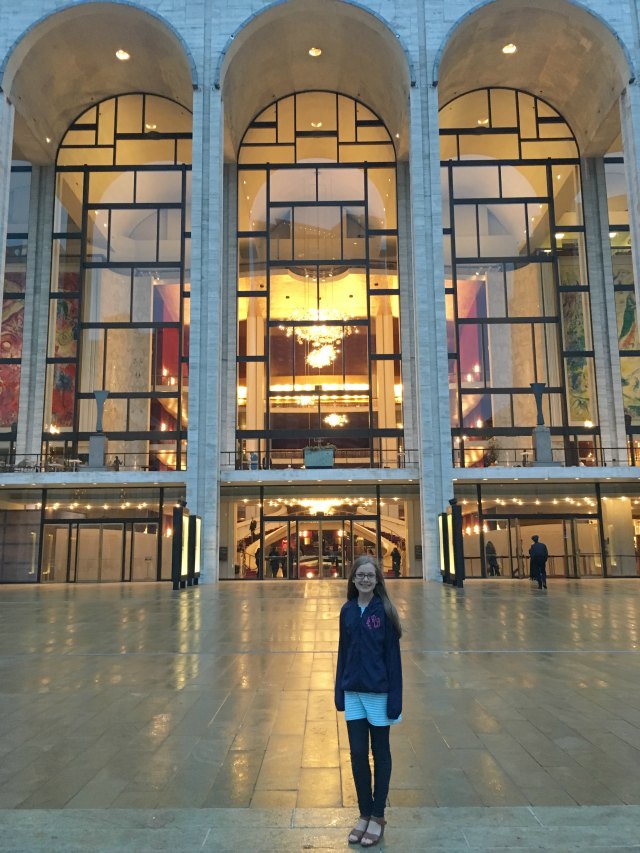 We met up with the guys after the shows finished and grabbed dessert (cupcakes and baby cheesecakes) at the Magnolia Bakery.  It reminded me of our Back in the Day Bakery in Savannah, and the buttercream frosting was just as good. 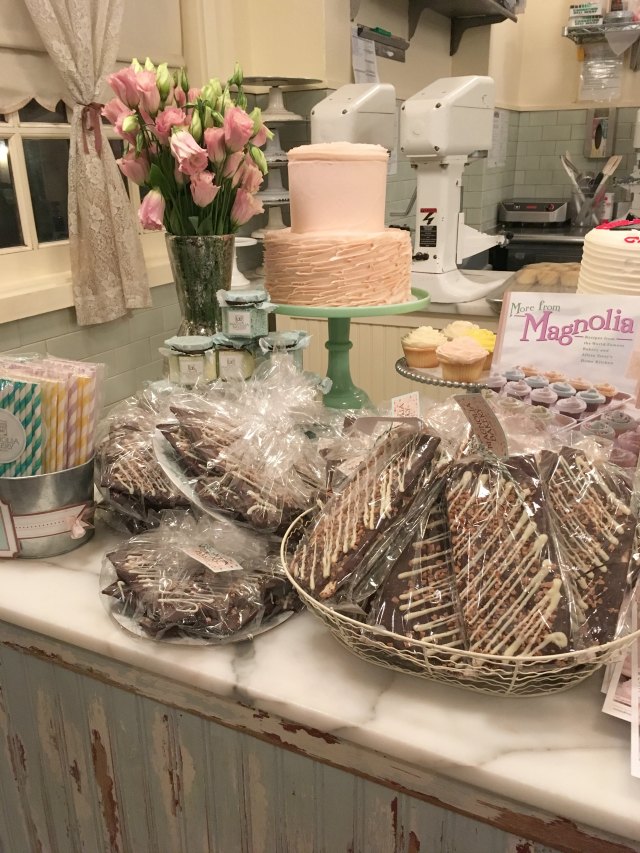 We rode the subway home and collapsed–such a busy day!

Saturday morning, we had an amazing behind the scenes tour of the World Trade Center and 9-11 museum with several other military friends who were also in town for the weekend.

One World Trade Center (formerly known as the Freedom Tower) disappeared into the clouds, but we still rode up to the top.  It’s the tallest skyscraper in the Western Hemisphere, and even though my kids would have loved the view, I was kind of thankful that I couldn’t see out because I AM A HUGE CHICKEN.  Really tall skyscrapers sway in the wind, people!  Which is why I live in a town where we don’t even have an escalator. 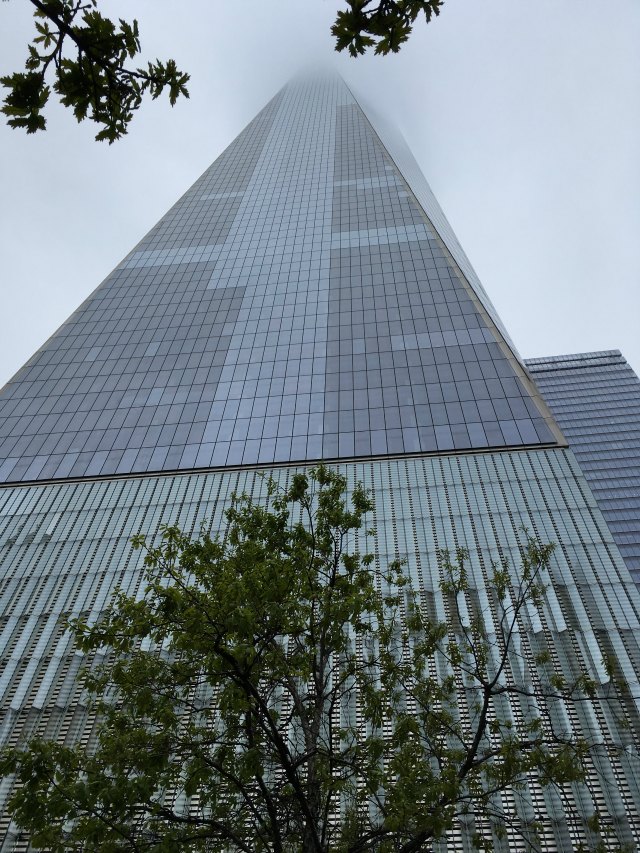 We also got to visit the Horse Soldier Statue (real name “America’s Response Monument”) at its new–and final–resting place near the Tower One and Two memorial pools.  My husband was at the dedication ceremony back in the day, so it was nice for me to see the statue in “real life” instead of just pictures.  De Opresso Liber! 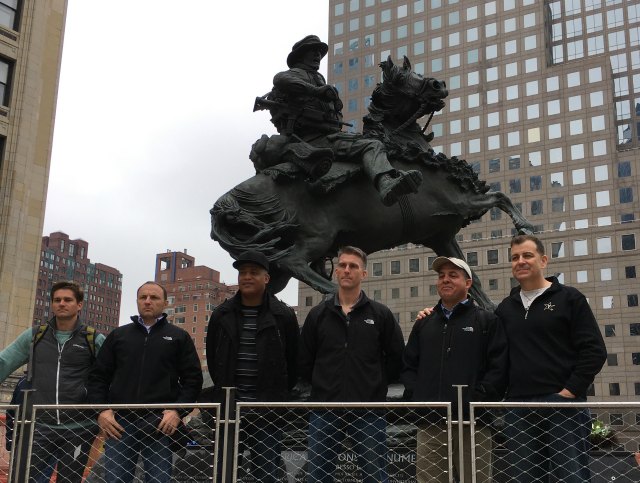 The 9-11 Museum was heartbreaking, as you can imagine.  There were thousands of people in there on Saturday morning, but you could have heard a pin drop.  Everyone was just solemnly taking things in and remembering.  My son was ten months old, spitting mashed peas out of his mouth in his highchair on the morning of 9-11, and he and his little sister have never known anything different.  But 9-11 changed the course of their lives, because we’re a military family, and I think it really helped them to understand why their dad’s job is important.

This Virgil quote broke my heart: 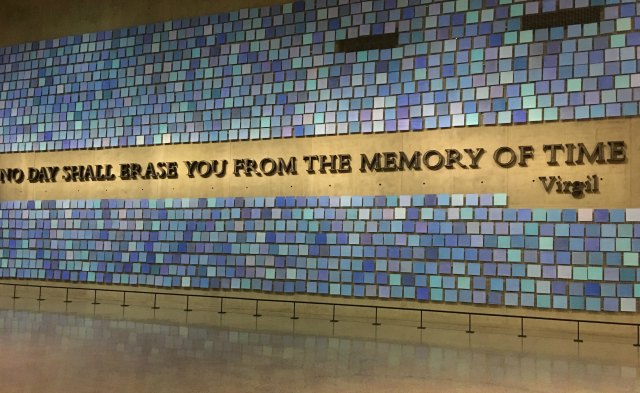 We left just after noon and had to take a few hours to decompress.  We ate lunch and just tried to breathe–Chris and I were definitely emotionally spent, which is something to keep in mind if you plan to visit.

We decided to hop on the (free) Staten Island ferry; I’d heard it was the best view of the Statue of Liberty and we needed to just sit and be quiet for awhile.

Lady Liberty didn’t disappoint, and I think was a good followup to the museum: 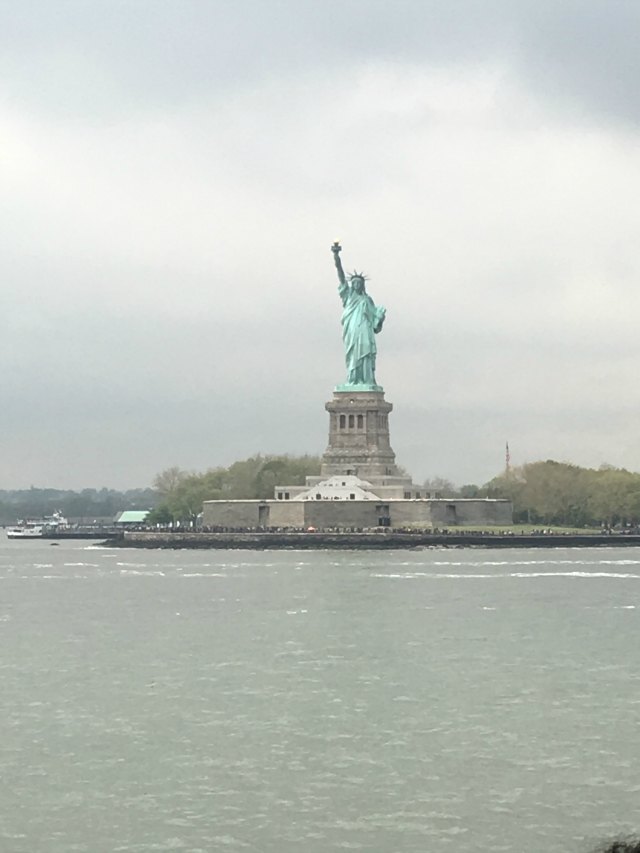 We returned to the hotel and got ready for dinner in Soho, at The Dutch.  My husband and daughter watch the Food Network all the time and wanted to eat at Andrew Carmellini’s restaurant. 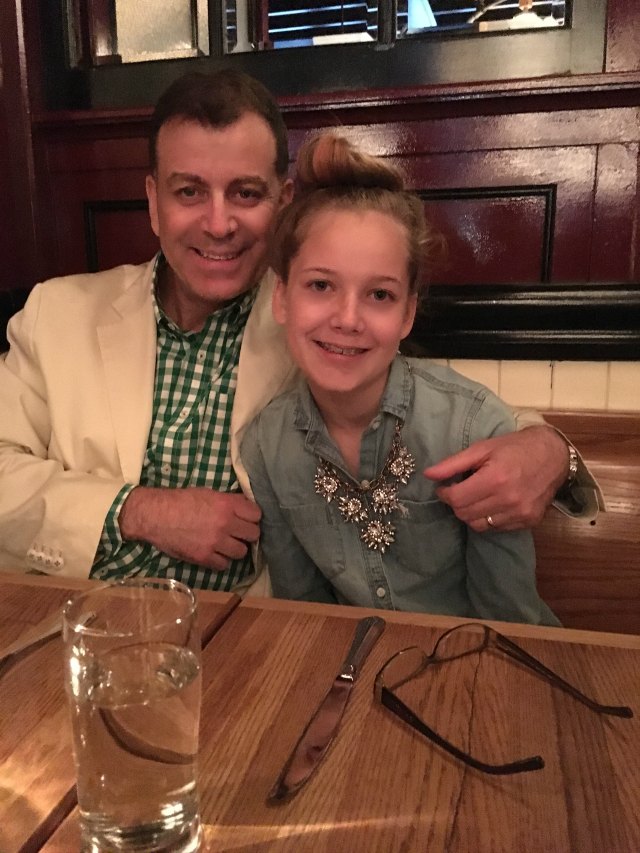 It was so good.  The blueberry fizz was epic. 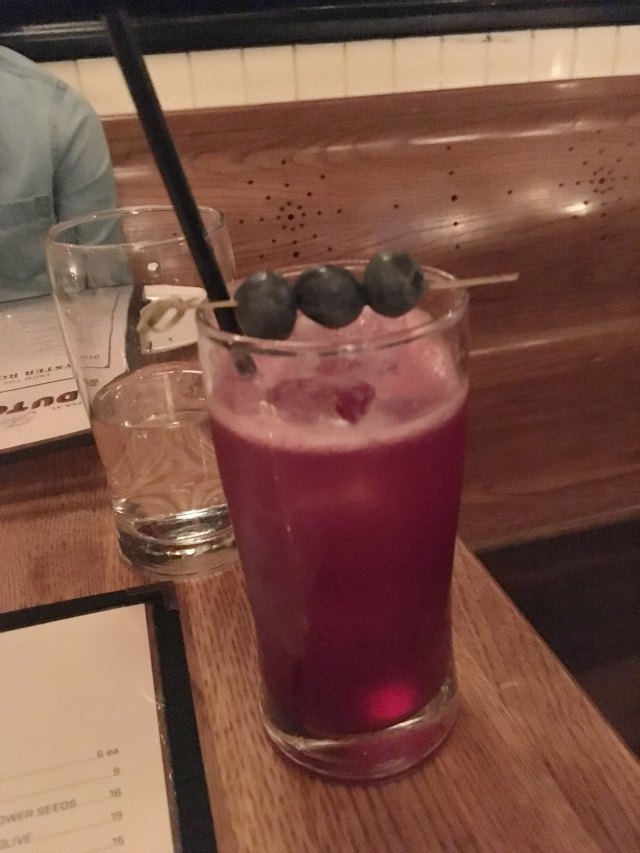 My son and I shared steak tartare of wagyu beef for an appetizer, and Sis and my husband had oysters.  From appetizers to dessert, it was worth every dollar and calorie! 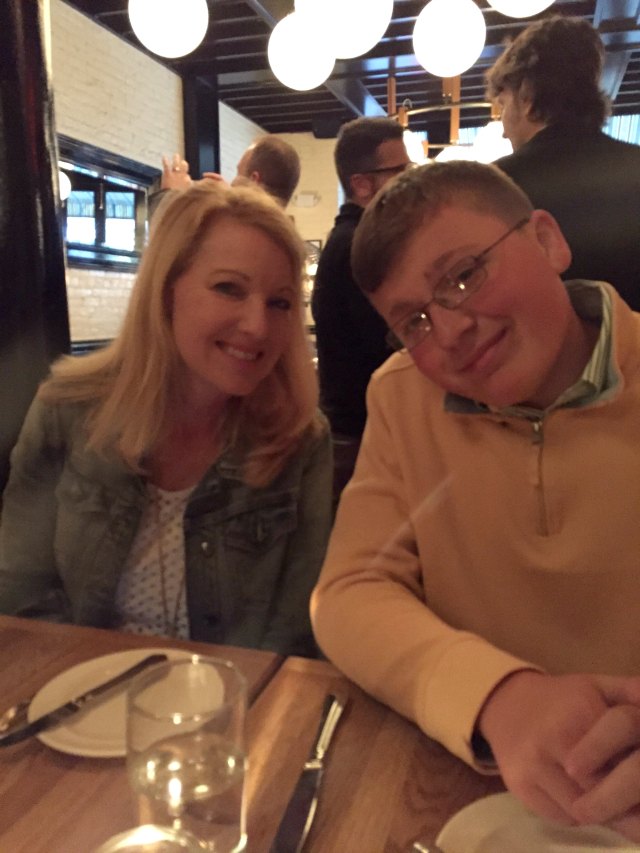 We rolled back home to the hotel via the subway–once we survived Grand Central, everything else was a snap–and collapsed.

On Sunday morning, the cloud cover was still thick, so instead of making another attempt to go up to the top of 1WTC, we ate breakfast in the financial district and hopped a train out to Newark for our flight home.

Harley was so relieved to see us; he’s had a hard time being an only dog since Sunny died. He was in very good hands with two sets of neighbors taking care of him and making sure he got his walks, though.

My dear neighbor, Mara (“mom” to Harley’s girlfriend, Mia), left me these lovely flowers because she knows that Mother’s Day is a tough day for me.  Tears! 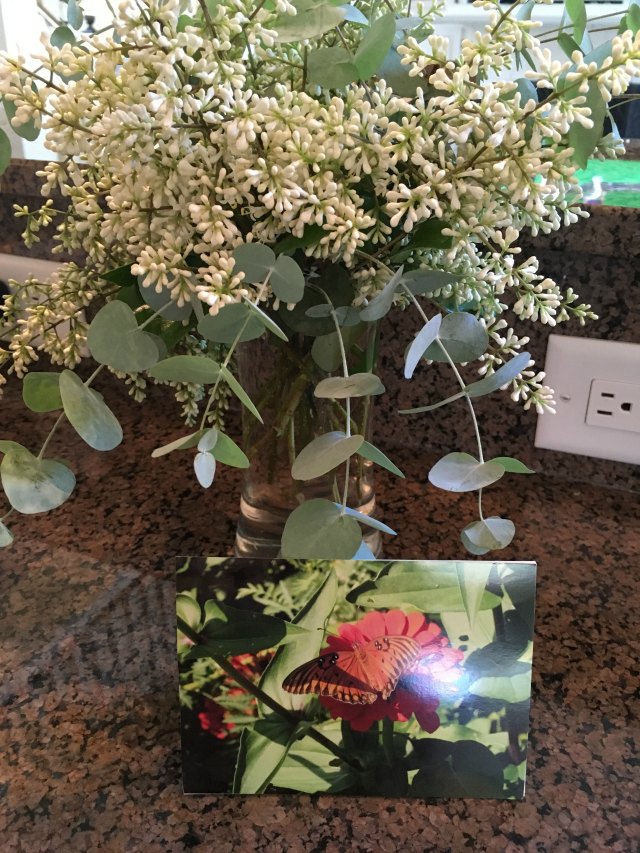 It was such a fun weekend, but visiting New York is similar to visiting Disney–it’s not exactly a relaxing vacation!  It’s such a fun town, though, and we can’t wait until we visit again.

Thanks for stopping by–